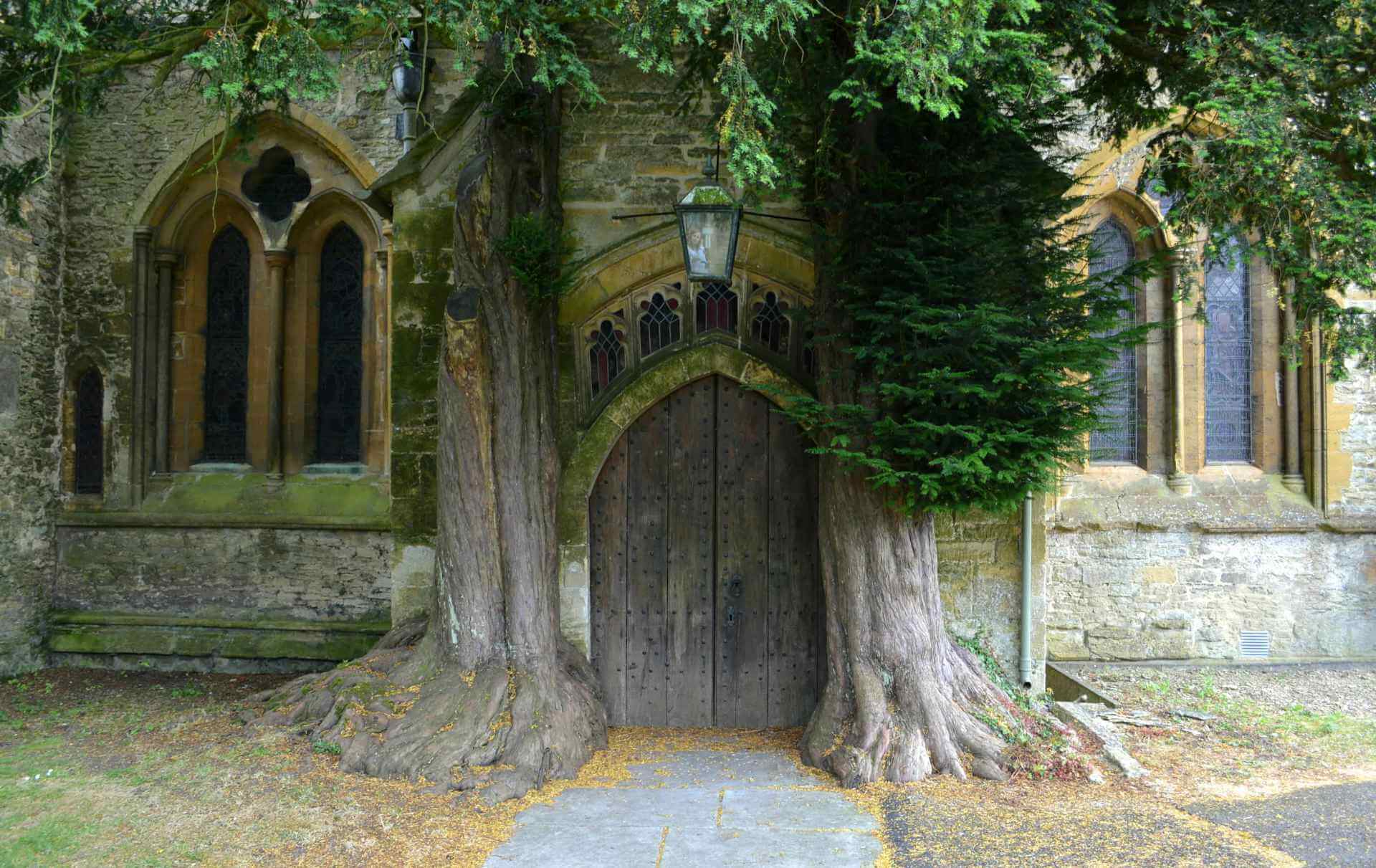 n a recent trip to England I couldn't help noticing all of the old world doors still in use.  Many of our clients request the timeless old world appearance in doors and in other architectural elements.  This is the case whether it's Mountain style architecture, Beach House, Storybook, Tuscan, and others. Being an architect, and having a new Nikon, of course I had to start snapping photographs of these treasures.

]As you can see, it's not just the doors themselves that make great entryways, but also the surrounding architecture, and even the landscaping.  The entry above, at Stow-on-the-Wold's St. Edwards Parish Church in the Cotswolds, could just as easily be seen in a Lord of the Rings or Harry Potter movie.  It's actually believed to be the inspiration for the Doors of Durin in J.R.R. Tolkien's The Fellowship of the Ring, the first book (and film) of The Lord of the Rings trilogy.

It doesn't get much more old world than this.  The door above, in London's Westminster Abbey, is Britain's oldest door. The text below reads, "Most likely constructed in the 1050's for St. Edward the Confessor - Westminster Abbey".

]Located just around the corner from Britain's oldest door, the door above is to the Pyx Chamber in Westminster Abbey.  This chamber was used as a treasury for both the monastery and for the British crown.

Below is the entrance to Alnwick Castle, in northeastern England.  This entrance is actually the "entrance gate", which typically invaders would try to take down when storming the castle.  These doors are about 6" (15 cm) thick.

By the way, if you ever want to do something fun with the kids, take them here for broomstick training from a Hogwarts wizard.  If you've ever seen the first Harry Potter movie, this is where Harry took his flying lessons on the Hogwarts grounds.  For more info on Hogwarts, see our blog post on The Architecture of Hogwarts Castle.

The above photo is of the entrance gates to Alnwick Castle's keep.  Keeps were fortified residences on the castle interior, typically used as a refuge of last resort should the castle fall to an enemy.  Alnwick Castle's Keep currently houses the State Rooms of the Duke of Northumberland and his family. Speaking of filming locations, it also housed the 2014 Downton Abbey Christmas Special.

Below is another side door at Stow-on-the-Wold's Parish Church.  Fairly simple, you can easily see the decorative steel plates and clavos, which were large, often decorative nails, usually connecting to plates on the other side of the door.

Below is a rustic door at Hampton Court Palace.  This door is located in the kitchen area, and is fairly nondescript, except for its arch (which were common in the Tudor age) and wood timber door header.  Hampton Court Palace used to be one of the homes of the tyrant King Henry VIII. The vast kitchens were able to serve grand feasts to a thousand people.  On our recent trip we could have stood inside one of the roasting ovens, if not for the roaring fire inside it.

Below is another fairly simple Tudor arched door at Hampton Court Palace.

Sure, door design has improved in recent years (in some ways), but if anyone wants a true "old world" door, it's always good to hearken back to the classics.  These give hints of the steel plates, levers (handles), clavos, and other hardware that are popular today in newer versions of "old world" doors.

These photos are only from my travels, and so by no means are the best old world doors out there.  I'll include some more from other countries later.  I'd be interested to know of other great doors around the world.  Feel free to leave comments or even send photos, and I may include them in a future post.

‍Hendricks Architecture designs custom residences throughout the USA and elsewhere, from small beach houses to larger mountain style homes, and just about everything in between.  We design collaboratively with our clients, creating the right fit for their lifestyles and aesthetics.  Doors are an integral part of the design, and can either be custom designed for each location, or we can help you choose from some reputable door manufacturers.

Why Hire An Architect?

A History of Thatch Roofing