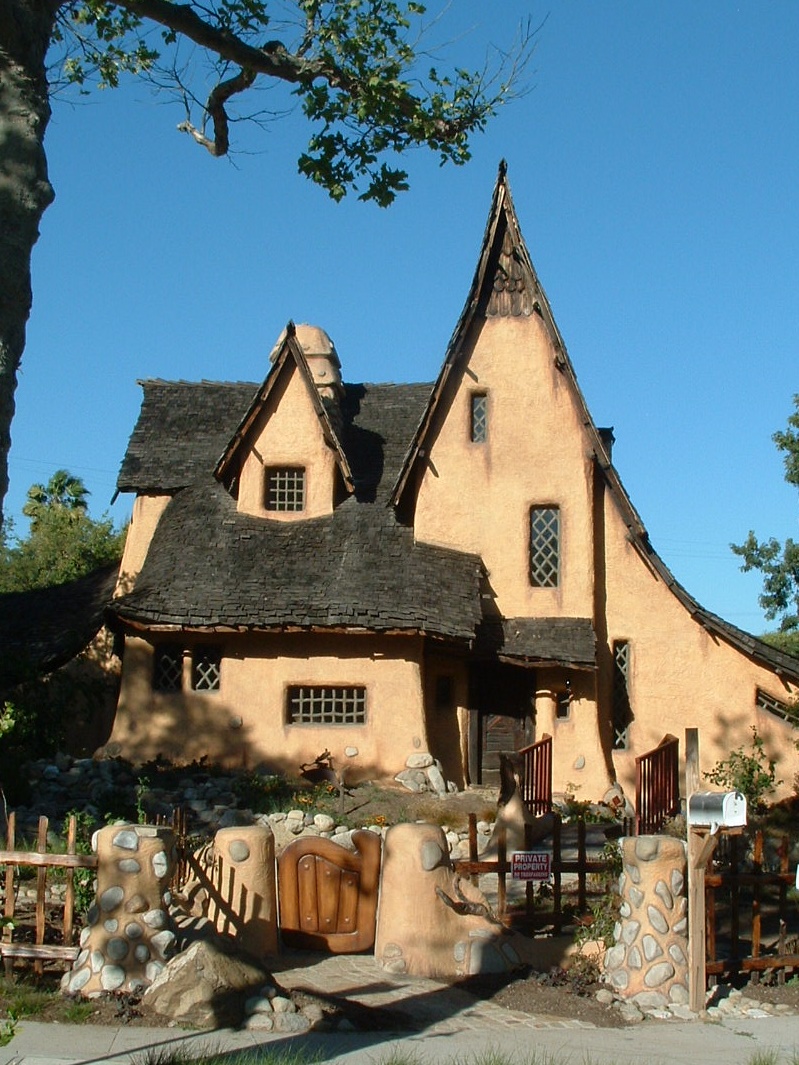 The Spadena House in Beverly Hills, California is one of the most recognizable homes of Storybook style architecture. Nicknamed "The Witch's House", this Hansel and Gretel cottage is the last thing you would expect to see in posh Beverly Hills. As an architect, my main critique would be that it needs more windows for natural light on the interior. But then again, who's going to argue with a witch and her privacy demands.

In 1926 the home appeared in Dixon's magazine, and was described as "A New Home With an Aged 'Old World' Appearance". The article noted, "All lines in the designs are irregular, crooked and distorted, even the metal bars in the windows are not made straight. All of which, together with color used in painting the house, gives an old weather-beaten appearance."

The house was designed in 1921 by an art director, and was built in Culver City to provide offices and dressing rooms for the Willat movie studio. The building doubled as a movie set and appeared in several silent films in the 1920s. The building soon became widely influential among maverick architects in search of new ideas.

Architect Charles Moore once described the home as the "quintessential Hansel and Gretel House", and the home is believed to have greatly influenced the architecture of Disneyland, as well as Disney's Imagineering department.

The building moved to Beverly Hills in 1934 and has since served as a private residence, beginning with the Spadena Family. The Spadena House is the perfect example of an original Storybook house where it cartoonishly has no lines that are straight or plumb, and it was meant to appear rusticated. The roof has a seawave pattern that appears to leak horrendously and will fall in at any time. The front of the home is surrounded by a moat-like pond and gnarled, twisted trees. I would bet at Halloween that many children (and adults) wouldn't dare steal a peak into one of the dark windows framed by the saggy wooden window shutters. But then again, how could you not?

‍Hendricks Architecture specializes in residential design, most specifically in the design of mountain style homes and cabins. See Storybook Cabin Plan for an example of one of our Storybook homes, and for more information on the Storybook Style. We're located in Sandpoint, Idaho.‍

Negotiating with a Contractor

Choosing a Contractor by Competitive Bidding

A Great Time To Remodel