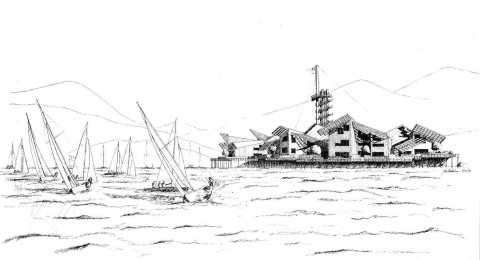 urviving architecture school can be a tough road, depending on how you look at it. When I went to Texas Tech University in the late 80's there were over 400 students in my freshman class. Less than fifty of us graduated on schedule. Most of the others dropped out, switched majors, or graduated later. These numbers might be enough to scare anybody off, but the fact of the matter is if you stick with it, remain positive (and realistic), and have fun while working hard, you're going to pass.

Before I go on, I'd like to note that, yes, I understand that the 80's may be ancient history to some of you. Computer classes were electives back then. Men wore pink shirts and parachute pants, even in Texas. Some even listened to and had hair like The Flock of Seagulls. The fact of the matter is, the concepts in architecture school are still basically the same whether you're using the drawing board or the computer.

Anyways, most of the drop off happens the first year. The professors do this quickly so you're not wasting your time. Some professors will give you those same scary statistics in the first few weeks of school. Soon after, 10% of the students have disappeared. The professors will work you hard enough that you may miss some parties and some sleep. This will get rid of several more.

Everybody hears about the sleepless nights of an architecture student. In many cases this is true. There is a way to avoid it though - Don't Procrastinate! In my first year we had many small design projects, most averaging around three to four weeks in length. I watched many students do absolutely nothing the first week or two, then work late nights the last week. I learned pretty quickly that if I started much earlier my mind was much fresher, the designs were better thought out, and I slept peacefully that last week while many of the other students were working late or pulling all nighters. Plus I always knew that I am one of those people that just needs sleep more than most.

I did stay up all night once, and this was unavoidable. In my second year my professor gave us a short two week project. It was a large viking museum. We had two weeks for design, revisions, renderings and a model. I worked on it every day for those two weeks. I remember it was due on a Friday afternoon. The Sunday night before I had my last eight hour night of sleep. The next few nights I had six, four and two hours of sleep. Thursday night I didn't sleep at all, spending all night working in the architecture building with all of the other students. The next morning many of us had a quiz in another class. We all failed, and I fell asleep during the test. Later that afternoon as I was finishing up my project, I was drawing a line on one of my renderings and fell asleep again. I ended up drawing a big fat line across the whole rendering.

Architecture school really isn't all that bad if you enjoy creating things. The projects are typically more fun than many projects architects work on in the real world, and I've always enjoyed art classes. One of my art professors told us that once you really understand shade and shadow, the whole world opens up, and you see things differently. That always stuck with me, and I soon saw and understood how he was right.

The professors bring up all types of fun projects. In one design class we each had to design a chair using only paper and string. We all had to sit in our chairs during the critique. Unfortunately for me, I was one of the last ones to present. I sat there watching the others as my chair slowly sagged towards the floor.

During our last year we could choose any project we wanted for our thesis. We spent the fall researching and writing a program. In the spring we worked on the design. I chose to design a clubhouse and resort facility for the Fresno Yacht Club at Millerton Lake. I grew up as a member of the club (and hope to sail in next weekend's High Sierra Regatta at Huntington Lake) and always sailed by a point on the lake where I imagined would be a great location for a clubhouse and restaurant.

Every professor had his or her quirks. One seemed like he wore the same clothes every day. Another must have had a full closet of ties and wore a new one every day. One you weren't sure if he was looking at you or not, always looking from the corner of his eye. Another had a questionable gender. The fact of the matter though, is they all had something to offer, they all had talent, and they all wanted to teach. Learn from them. Resist taking classes from the same professor twice. I've come to realize that there's no such thing as a person without quirks. We're all better off because Albert Einstein had quirks.

Be a sponge and absorb everything. One of my professors was either a student or employee of Louis Kahn and would share stories about him. Peter Eisenman, a very prominent architect and a member of the famed New York Five (famed in the architecture world), came to give a lecture. Our professors also taught us the works of all the great architects. I fell in love with the imaginative architectural designs of Frank Gehry and Charles Moore. That was before Gehry was into the curves and was, along with Eisenman, unfairly labeled as a deconstructivist. Now, Frank Gehry's sculptured geometries may have elevated him to being probably the most imaginative architect, if not the best architect of the last fifty years.

One last thing I would recommend is to work for a contractor or framer before attending school or during the summers if you're able. I worked for a small contractor named Tom Leonard the summer before going to architecture school. In 3 months we remodeled a business office, framed a house in Monterey, and a cabin in Big Creek, near Shaver Lake. The house and cabin we did everything from digging the foundations with shovels to laying plywood sheathing on the roof. In those three months I learned more that's stayed with me than any of my years in school. Not just in how buildings go together, but in the value of hard work and the understanding of life from a contractor's perspective. I learned the value of a well designed, complete set of plans, as well as the value of a good contractor. Tom used to tell me things that still stick ,like, "When you go to architecture school, make sure you dimension the fireplace!"

Architecture is a rewarding field. Very few things are more gratifying than making people's dreams come true and seeing your work around town. In most cases work you design will remain long after your gone. In architecture school the camaraderie you have with your fellow students is much more pronounced than most, if not all majors. And besides, how hard of work is it when all you're doing is building models and drawing pictures?

‍Hendricks Architecture specializes in residential design, most specifically in the design of mountain style homes and cabins. We're located in Sandpoint, Idaho.

Why Hire An Architect?