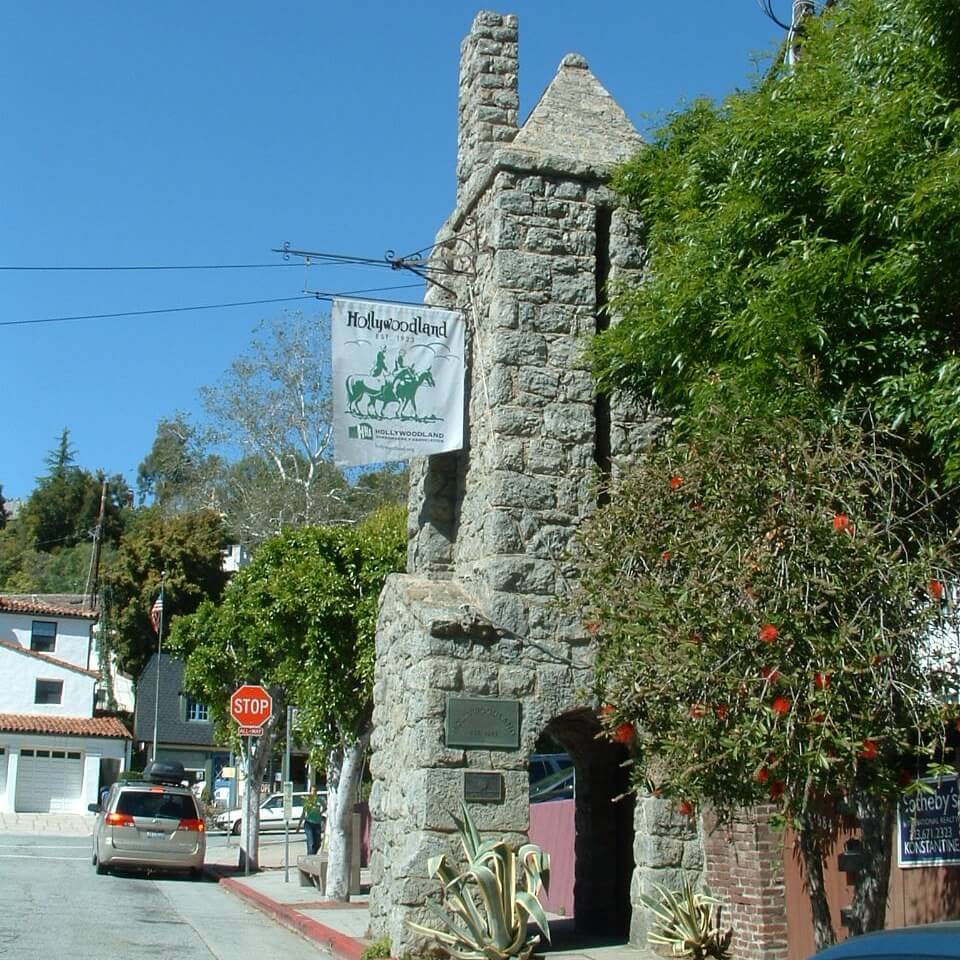 ecently my family and I took a whirlwind car trip to Arizona and Southern California to see family, friends and coincidentally, more Storybook style architecture. Along the way we stopped in Hollywoodland, a unique development of storybook cottage homes in Hollywood. I had briefly mentioned the neighborhood and some of the Storybook style origins on a recent blog post titled Storybook Cabin Plan, and since we were in the area, I added Hollywoodland to our itinerary.

As I had mentioned, the Storybook Style surged in popularity after Hollywoodland, a subdivision of cottage homes, was built in 1923. The theatrically designed homes served as residences in Los Angeles for a number of movie stars and received nationwide media attention as America’s first themed residential community. The Hollywood sign actually used to say Hollywoodland and was built to promote the neighborhood, which housed such notables as Bela Lugosi and Humphrey Bogart. The developers bowed out in the 1940’s and now the stars build to suit their own tastes. The neighborhood is now referenced as upper Beachwood Canyon.

Hollywoodland's covenants required homes to be designed in one of several European revival styles. Architects and builders made full use of this license, arriving at eclectic combinations that its developers might never have expected. Below is a Hansel and Gretel cottage combining half timbering, stone accent walls, and a seawave patterned roof with rolled eaves and jerkinhead gables.

A closeup of this home below shows more accents of the European style. In older times, homes were built of stone. Sometime along the way, the stucco style grew popular, and homeowners covered up the beautiful stone with stucco. This creative affect was applied to either side of the windows below. Additionally, shingle roofs were created in seawave patterns and shaped to represent the European straw bale roofs. Eventually wood shingle roofs were prohibited because of fire danger, so composition style roofs became the norm, though they pale in comparison.

Wolf's Lair, a rambling mansion built by real estate developer Milton "Bud" Wolf, is a Norman Revival style castle in Hollywoodland dating from the mid 1920s. Shown below is the gatekeeper's residence, designed by architect John Lautner in the 1950s.

Today, Hollywoodland has its own homeowner's association, but is often referred to as upper Beachwood Canyon. Shown below are some of the homes that have replaced many of the Hollywoodland cottages.

A word to the wise. If you ever plan to drive through Hollywoodland, make sure you bring a small car, and aren't squeamish about driving on narrow, winding roads.

‍Hendricks Architecture specializes in residential design, most specifically in the design of mountain style homes and cabins. We're located in Sandpoint, Idaho.

Why Design a Custom Home?