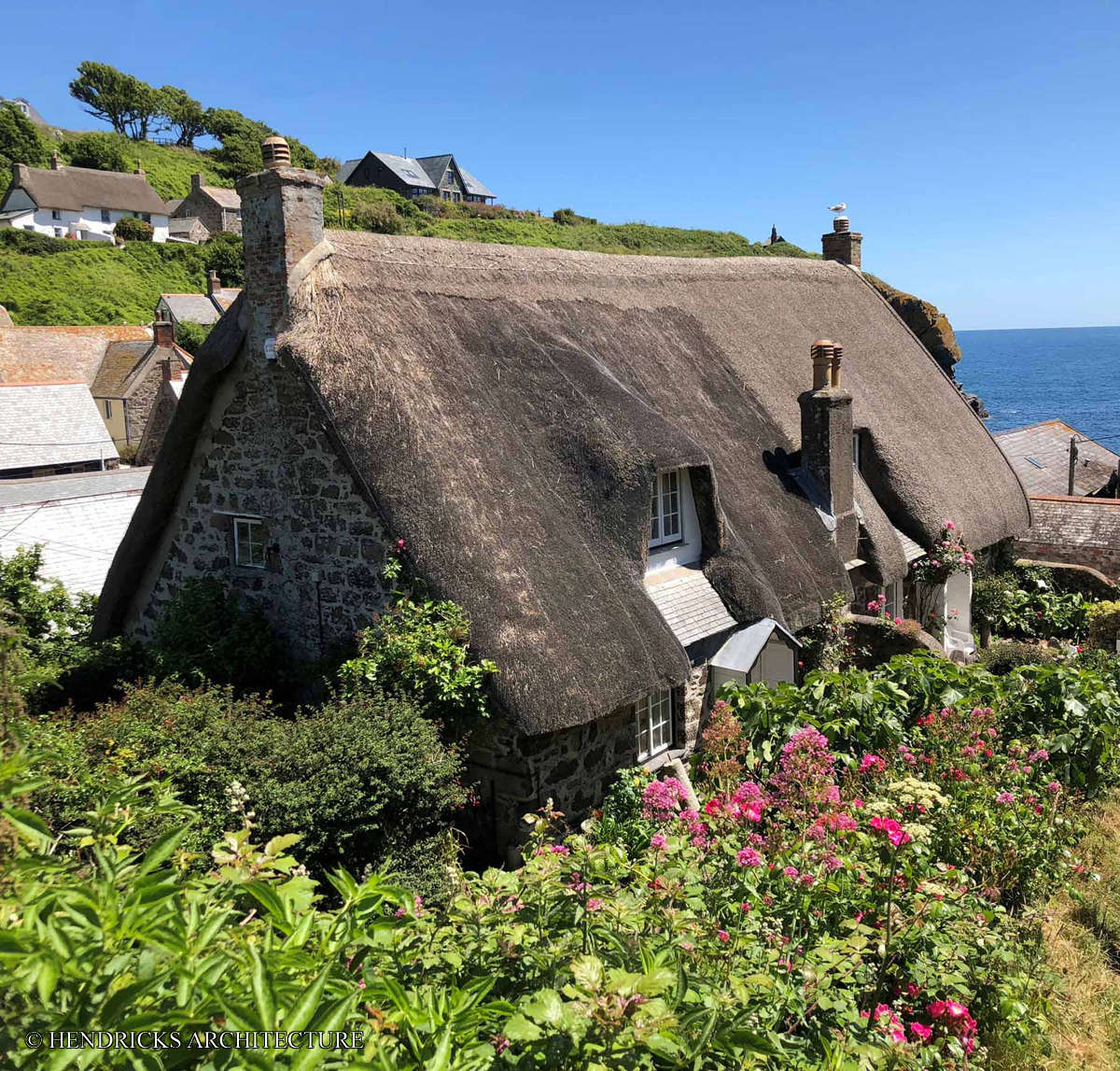 hatch roofing could be the next big thing.  It's been popular in Europe and Asia for a long time, but it might be on the "eave" of a new era in North America. Thatch is seen as time tested, sustainable, durable, and of course full of charm and character. Given this outlook, it has peaked the interest of both traditionalists and modernists alike. More and more people are asking for thatched roofs.

Thatching is having a revival because it's known as environmentally friendly with natural materials.  Thatchers today are working with developers and architects to make it the preferred roof of the future.  Today's thatched roof offers limitless possibilities.  A 50 year lifespan rivals any of today’s high quality roofing.

The thatching trade’s biggest ally is known as The International Thatching Society.  They represent groups in Sweden, Denmark, South Africa, Germany, Japan, the United Kingdom and Ireland, and Holland.  Japan has numerous thatched buildings with roughly 100,000 properties and a workforce of 300 thatchers to maintain and renew this cultural heritage. It is estimated that Denmark has 350 to 400 thatchers.

‍With one of the oldest modern day thatching societies and having one of the largest thatching workforce, the United Kingdom and Ireland have an estimated 600 to 900 thatchers and approximately 60,000 thatched properties.  Up to 1,000 thatchers find work in Holland where the thatching tradition both in the past and the present is strongly rooted.  Including traders and growers, it is estimated that 1,500 people in Holland earn a living from the thatching industry.  Approximately 4,000 to 5,000 new roofs are thatched annually in Holland.

Colin McGhee, a native of England's Lake District, is a roof thatcher based in Virginia.  He has been thatching in the United States for over 25 years, including repairing several roofs at the Jamestown Settlement living history museum.  At the age of 25, he became the youngest thatcher ever to win the Master Thatcher's Cup.  In 1992, McGhee was flown to the United States to do a thatched roof for a Virginia home.  After McGhee returned to Britain for a few months, he came back to set up on this side of the Atlantic.

"People who want a thatch roof are usually a bit more eccentric," McGhee said of his U.S. clients.  "They see it and they want it.”

When thatching, McGhee says, he tries to be meticulous.  He feels that the roof has to have at least 18 inches of thatch for proper protection.  Hazel-wood sticks are used to tie the straw down. They must be done at a specific angle to prevent water from getting in.

Roof thatcher William Cahill, a native of Ireland, is based in Ohio.  He has been thatching in the US for over 30 years.  William trained with his good friend, the late Peter Brockett, the master thatcher who led the thatch training school for the English Thatchers Association.  He mentored under Peter Slevin, the only thatcher in the United States who has been here since the 1950s.  Slevin was instrumental in getting the Smithsonian Institute to sponsor William’s work on the prestigious Jamestown Church project in the historic Jamestown Virginia Settlement in 1986.

While thatch hasn't been as common in the U.S., Cahill estimates that there are thatched buildings in every state.  When a thatched house in Maine was listed for sale it increased traffic on its road enough to draw the attention of the police. Since there are a smaller number of thatchers here, as evidenced by the variety of project locations in their portfolios, nationwide travel is often part of their work.

Cahill’s tool chest is not of the hammer and nail variety.  He has a small forge of his own back in Ohio, where he crafts many of his own tools.  "It's the first form of roofing it the world," says Cahill. He says it’s a lovely feeling to know you are preserving an ancient building craft, using sustainable/green materials and creating a unique custom product with each handmade roof. Cahill says that people today travel and are exposed to a variety of things, whether it's a Bosch washer, European cars, or thatch roofs.

Most inquiries we get for thatched properties tend to be from people looking for the ‘green’ factor.  Thatch is seen as a sensible, sustainable material, observes Andrew Harwood, head of Strutt & Parker Sevenoaks.  His associate Edward Church, head of Strutt & Parker Canterbury, adds that, "Thatch is the original roofing material and is generally local. Environmentally friendly it certainly is!”

William Cahill says that with a little regular maintenance thatched roofs can last for hundreds of years.  With its history going back, beyond antiquity, its easy to say that thatch is one of the most time tested types of roofing materials. Often known as a the roofing of storybook homes thatch is sought after for its old world charm.

According to Colin McGhee, thatch roofs are not only aesthetically appealing but also provide four times the insulation of other typical roofs.  Given that thatch has a high R-value, a building’s roof insulation can be significantly reduced, if not, eliminated.  As a rule of thumb 10” of thatch has the same R-value as 7” of fiberglass batt, or an R-value of R26.6.  If you're not familiar, R-value measure's a material's ability to resist heat flow. The higher the R-value the better the insulation.

‍For several reasons, thatch is highly sustainable.  Thatch can be grown most anywhere, which can make it easy to locally source.  It’s a rapidly renewable resource ready for harvest once if not several times a year.  Since it can be sourced locally, using thatch can help boost local economies.  Unlike most roofing, thatch is biodegradable, so it’ll simply decompose when it’s disposed of.  It doesn’t get more green than that!

‍Q: How many buildings are roofed with thatch?
‍A: The United Kingdom and Ireland are known for the strength of their past and present thatching tradition.  A 2013 report estimated that there were 60,000 properties in the UK and Ireland with a thatched roof.  Thatch is less common in the US, but thatcher William Cahill estimates that there are thatched buildings in at least every state. However, there are at least 100,000 in Japan, 4,000 to 5,000 added annually in Holland, and an estimated two million in Africa!

Q: How much does a thatch roof cost?
‍A: Pricing depends on size, location, roof features etc., but in general, thatch installed is about $35 per square foot plus material delivery.  This is fairly comparable to authentic slate roofing.

Q: How does a thatch roof impact property value?
‍A: Properties with a thatch roof are said to hold their value better than comparable ones with a slate or tile roof. Realtor Sophie Gannon says thatch is a selling point. People come to her specifically asking for thatch, in search of their "dream country house."

Q: How does thatch keep water out?
‍A: Naturally waterproof, water reed is actually hollow and the cellular structure is so tightly overlapped that water can’t get inside.  Bundled together, as it would be on a thatch roof, water can’t penetrate one, maybe two inches. We’ll cover more on this topic in another post.

Q: How does a thatch roof perform in heavy winds?
‍A: With a network of thatch going back 5’+ into the roof, wires, and steel rods, thatch is quite a sturdy roof.  It’s reported that during a 1998 storm in Ireland with 100+ mph winds, the thatch roofs were left unscathed, while many slate roofs suffered serious damage.

Q: Is thatch suitable for snowy climates?
‍A: To cope with snow, thatch roofs are steeply pitched.  William Cahill says that thatch is suitable for snowy climates if the roof pitch is at least 12/12 (45 degrees), preferably greater.  A roof with this pitch or greater is more attractive anyway, in our opinion.  Historical villages such as Shirakawa-gō and Gokayama in Japan receive heavy snow in winter and are known for their thatch tradition.  We’ll cover more on this topic in another post.

Q: What material are thatch roofs made of?
‍A: Most commonly thatch consists of long straw wheats or water reed, but there are many other thatches such as heather, palm, bamboo, eucalyptus, and willow. Often times thatchers harvest their own thatch. For example, William Cahill cuts 40 acres of water reed every year in New Jersey. "It's a very invasive weed," he said.

Researchers are experimenting with the Viking tradition of sea weed (eel grass) thatch.  The few examples exist on the island of Læsø in Denmark.  The eel grass is infused with salt from growing in the ocean.  The salt makes it fireproof, pest, and rot resistant.  The seaweed thatch is proven to last for centuries.  It is an abundantly available, rapidly renewable, and a carbon negative resource that can be efficiently wild harvested, or cultivated, so as to not disturb the marine habitat.

Q: Are there any pest issues with thatch?
‍A: A properly thatched roof will have no holes.  Rats and mice won’t bother with thatch if this is the case.  Birds won’t bother with water reed because it is too rigid.  However the wheat straw found in the ridge or the entire roof is suitable bird nest material.  This can be easily dealt with by covering the wheat straw portion of the roof with chicken wire.

Q: How long does a thatch roof last?
‍A: Long straw will last 15 to 30 years, combed wheat reed will last 25 to 40 years, and water reed: 50 to 60 years.  Note that a 50 year roof is comparable to the warranty on other types of roofing such as metal or lifetime asphalt composition shingle.  Ridges are always made with long straw and they will last for 10 to 20 years.

For more on the history of these beautiful roofs, see A History of Thatch Roofing.

Have you considered thatch for your next roof?  Feel free to let us know in the comments below.Brian Reeves

‍Follow our blog with Bloglovin

Snow Insulation and the Igloo