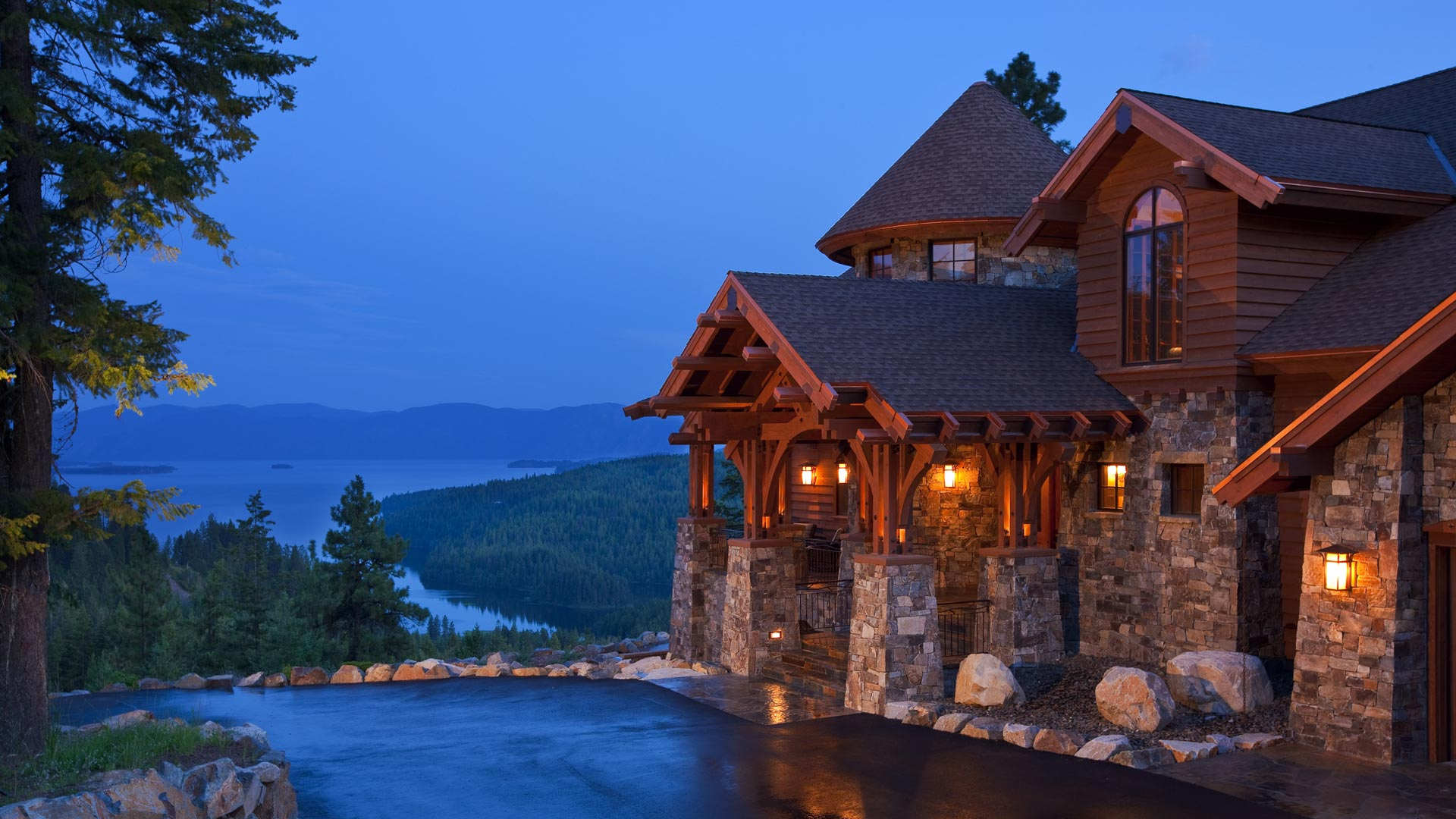 n 2004, while living in Seattle, I saw an article describing Sandpoint, Idaho; a beautiful lower elevation resort community surrounded by mountains and a huge lake. I became intrigued, as my wife Annie and I had wanted to get away from the big city. We both grew up in rural areas and wanted to have that for our three children as well. I also wanted to be more centrally located in a mountain community as I specialize in more rugged mountain style architecture than most Seattleites care for.

I searched for Sandpoint on the internet and found Schweitzer Ski Resort. I had heard of Schweitzer, but never realized it was in Sandpoint. I requested some information, and Jennifer Fortune, a realtor at Evergreen Realty at the time, sent me several brochures.

I was busy with several projects, and it went to the back of my mind. A year later, I noticed an advertisement for Dover Bay, a new community just west of Sandpoint. I called up the Owner, Ralph Sletager, who invited me to come out. I made the six hour drive from Seattle. My first impression of Sandpoint was the Long Bridge, a two mile bridge dividing Lake Pend Oreille from the Pend Oreille River, leading you into Sandpoint. It was late afternoon on a cold December day, and I must say I was quite impressed. Mountains stretched everywhere over huge expanses of water.

The next morning, I met with Ralph, and then Tom Mehler, a realtor at the time at Dover Bay Real Estate. Tom showed me around Dover Bay and gave me the whole run down on Sandpoint. That afternoon I met Jennifer at Schweitzer and had lunch at the Chimney Rock Grill. She then drove me all around the Schweitzer neighborhoods. It really is beautiful up there, especially the lots with views of the lake.

I was able to get a small project in the area, and came to Sandpoint a couple more times, the second time bringing the family. One morning on that trip I met with Dick Villelli, the owner of Hidden Lakes Golf Resort. He told me he was selling the property, and invited me and the family to meet the new owner that evening. We showed up and Dick was serving some great margaritas. He introduced me to Chuck Reeves and his family. Chuck was to be the new owner of what would soon be called The Idaho Club. Chuck was very excited about the new development and Dwight DeMay, the planner from Hart Howerton was there briefing me as well on the Jack Nicholas designed course and Hart Howerton designed community. Unfortunately, our youngest child was not a happy camper so we had to leave early.

Nevertheless, Annie was impressed with Sandpoint, so the next visit Luke Webster from Evergreen Realty showed us some properties (Jennifer was on vacation in Spain), and we moved out a few months later.

So far we've really enjoyed Sandpoint. Our two older children are enrolled in Sagle Elementary and are very happy there. They are also involved in soccer in a town that surprisingly is one of the most active soccer communities in the country. Annie is active as a PTA co-president, while I have been busy with work and various organizations. I've been asked to participate in various career fairs for students which is always fun (though nothing beats the time I was asked to show second graders how to draw Teenage Ninja Mutant Turtles).

Sandpoint has just about every restaurant imaginable. The best meal I've ever had was the seasonal elk tenderloin, cooked rare/medium rare at The Sand Creek Grill. MickDuff's is my favorite spot for lunch during March Madness.

There is one movie theater at the Bonner Mall, and there is also the beautiful Panida Theater. The Panida offers theater productions, movies, and music, along with various other events. The Panida has been around since 1927 and is on the National Register of Historic Places.

My favorite event in the summer is The Festival at Sandpoint. This is a fun, casual two week event that holds evening outdoor concerts. You can bring in your own coolers and sit on the grass or on the stands.There is also plenty inside to eat and drink from various local establishments. The last two nights I was there I saw The Los Lonely Boys, along with 70's night with The Marshall Tucker Band, Pure Prairie League, and The Richie Furay Band (formerly of Poco and Buffalo Springfield). Other recent artists have been Wynonna, The Bodeans, Ziggy Marley, David Gray and Big Bad Voodoo Daddy. This year's lineup includes Blues Traveler, Boz Scaggs, Michelle Shocked and Clint Black.

Sandpoint is located on Lake Pend Oreille, between the Selkirk Mountains and Cabinet Mountains, which are part of the Rocky Mountain Range (although in Canada the Selkirks are designated as part of the Columbia Mountain Range). Lake Pend Oreille is the biggest lake in the Northwest, and the biggest in "lake country" consisting of other behemoths Lake Coeur d'Alene and Priest Lake. These lakes produce the biggest trout in the country, along with some big Kokanee. Several of my friends have made the trip up here and prefer the gamey shoreline fishing for bass, perch, pike and bluegill. There's plenty of wildlife here as well. On my trail runs I've met up with several white tailed deer, elk, moose and black bears. There are some grizzly bears in the Cabinet Mountains to the northeast of the lake, but I've never seen one.

For other things to do in Sandpoint, here is a website with loads of Sandpoint activities.