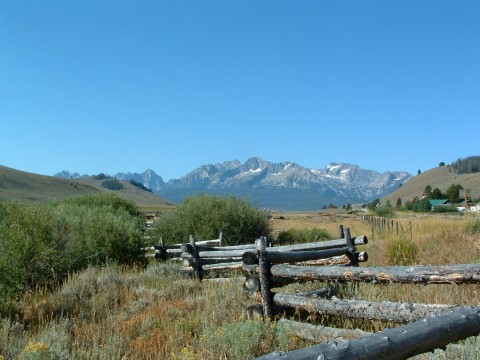 very summer I take the family on a camping trip.  Last summer we stayed in the State of Idaho.  We made a counter clockwise route from Sandpoint to Stanley, and back through Missoula, Montana.  We were also able to visit a ghost town on the way, and see some rustic building techniques, maybe a little too rustic for some.

Except for the southern central section of the state, there are not a lot of flat places in Idaho.  In fact, percentage-wise, Idaho is more mountainous than any other state. And where there are mountains, there are rivers.  About ¾ of our trip was along some very beautiful rivers, and much of these where along Idaho “Scenic Byways”.  Many parts of these rivers are popular for rafting, and hot springs are abundant.

Our first day was spent driving down Highway 95 from Sandpoint, through Coeur d’Alene and Lewiston, along the rivers to McCall, and down to Lake Cascade.  The drive down into Lewiston is pretty dramatic.  The highway towers above as it weaves down into the city, which is hugged by the Clearwater and Snake Rivers.  We then drove up the Salmon River towards Riggins, and then up the Little Salmon River towards the beautiful town of McCall.  We finally arrived at Amanita Campground on Lake Cascade as dusk was setting in.

The next morning we saw coho salmon spawning in the stream next to our campsite.  After trying some fishing on the lake, we took a side trip to visit Tamarack Resort, a golf and ski community nearby.  In addition to the golf and skiing, they have a couple of nice amenities including the lodge, a fun little chapel, a ballroom building and a meeting building disguised as a barn and schoolhouse respectively.  The golf course is a signature Robert Trent Jones II design.  A village is in a long standing state of construction as they have been in and out of foreclosure.  However, I can see that once it gets resolved they could be in good shape.  That afternoon we went swimming in the lake, and finished off the day around the campfire.

The next day we continued on our way, driving south along the Payette River towards Banks.  We had lunch at a restaurant in Banks, just south of Banks Lowman road, which overlooks the Payette.  We sat back and relaxed, while below us was a bustle of activity as Bear Valley Rafting was beginning their half-day trips down the river.  After lunch we drove up the very windy, yet scenic Banks Lowman Road.  I had to stop and get out, looking down into the South Fork of the Payette River, which is known for its white water.  It just so happened that at that spot, far below, a rafting expedition was currently carrying their rafts a short ways down the river to avoid a more dangerous stretch.

We made our way east past Lowman towards Mountain View Campground, where we stayed the night.  This campground doesn’t exactly have a mountain view, other than the hills on the other side of the Payette River, but it does have some great spots on the river.  There weren’t any mosquitoes, but in the evening the no-see-ums were so horrendous that we didn’t last long around the campfire.

The next day we drove up Highway 21 along the “Ponderosa Pine Scenic Route”, and down into Stanley as we got our first glimpses of the Sawtooth Mountains.  The jagged panorama of the Sawtooths is one of the most beautiful mountain ranges I’ve ever seen.  Nestled in the valley below is  the Salmon River and the town of Stanley, Idaho.  Hardy folk live in this town, which has the honor of being ranked #1 for having the “most days with the coldest temperature” in the lower 48 states.

We were there in late August, so other than a few semi-cold mornings it was t-shirt and shorts weather.  On our first night we stayed in a hotel so we could take showers and enjoy soft beds (we’re tent campers).  The next four nights we stayed south of town at Casino Creek Campground, along the Salmon River.  It was a nice spot.  The sites were fairly open and close together, but because it was late summer the campground was only about 20% full.

On one of the days we drove over Galena Summit to the Sun Valley and Ketchum areas, about 75 minutes south of Stanley.  On another we took a short drive north to the Bonanza and Custer ghost towns.  Being an architect who designs mountain homes, I get a kick out of seeing these old, rustic buildings.

Bonanza is spread out with various buildings and a cemetery.  Custer is in better shape and has a nice self-guided tour, starting with panning for gold outside a schoolhouse, the first building on the tour.

One of the homes had an interesting roof material.  Flattened tin cans covered the whole roof, and were in great shape after 100+ years.  So if you’re willing to take the time to collect and flatten them, start saving your tin cans.  Just make sure you use a good underlayment.

I also found an innovative way to make a double powder room, OR double toilets in the master bathroom!

All kinds of ideas flow when looking at this master bathroom.

We also experienced Sunbeam Hot Springs.  Here, the hot springs mingle with the Salmon River, and there are several man-made pools, built with moveable rocks.  Temperatures vary depending on your proximity to the river. This would be a fun thing to design into a house.  Hmmm……

On our last day we caught several trout in the morning, and in the afternoon we went to beautiful (and popular) Redfish Lake, just south of Stanley.  Campgrounds and Redfish Lake Lodge and marina surround the north end of the lake.  To the west, the Sawtooths loom overhead.   A ferry ride from the lodge takes you to the base of the mountains, where there are numerous hikes and backpacking excursions to alpine lakes.  At 6457 feet above sea level, Redfish Lake is at the top end of Idaho’s Columbia River sockeye salmon migration.  The salmon enter the Columbia River from the Pacific Ocean, then up the Snake and Salmon Rivers, before traveling up Redfish Lake Creek.  After traveling about 900 miles from the Pacific, the salmon finally arrive at Redfish Lake.  See a map of the quest.

We had a visitor on our last night after enjoying a nice trout dinner.  Apparently the smell was pretty good, as in the middle of the night I woke up to some rustling around the campsite.  I got up and sat there listening, trying to figure out what it was.  I heard the small huffing sounds that bears make, and came to the conclusion that there weren’t grizzlies in the area.  In most cases I would have just stayed there and let it pass.  However, my daughter, who didn’t want to sleep in our big tent, was in a small tent about 30 feet away, and I didn’t want the bear getting close to her tent.

I decided I would quickly get out of the tent, make a run for the minivan, jump in, and start the engine to scare it off if it hadn’t already bolted. Just then, it brushed against the side of the tent where Annie was sleeping, and she bolted upright with wide eyes. “What the hell was that?”

I mouthed “bear”, paused, and then keys and flashlight in my hand, I quickly unzipped the tent, scanned quickly, and ran for the minivan.  I quickly grabbed the handle and pulled.  It was locked!  Cursing myself and the non-working keyless remote (which would have been useful from inside the tent), I fumbled for the right key and jumped in.  I started the car, turned on the lights, turned the car around to face the campsite, and then turned it off.  The bear was gone.

The next day we drove north up highway 93 (also called the Lewis and Clark Trail), along the Salmon River, and then up and over the spectacular Bitterroot Mountains via Lost Trail Pass.  This pass is about a half mile west of the Continental Divide.  We then traveled north through Hamilton and into Missoula, Montana, where we spent the night.  We then took Highway 200 northwest along the Clark Fork River to Lake Pend Oreille and home in Sandpoint.

John Hendricks is a licensed AIA architect at Hendricks Architecture.  We are an architectural  firm in Sandpoint, Idaho, specializing in mountain style homes.