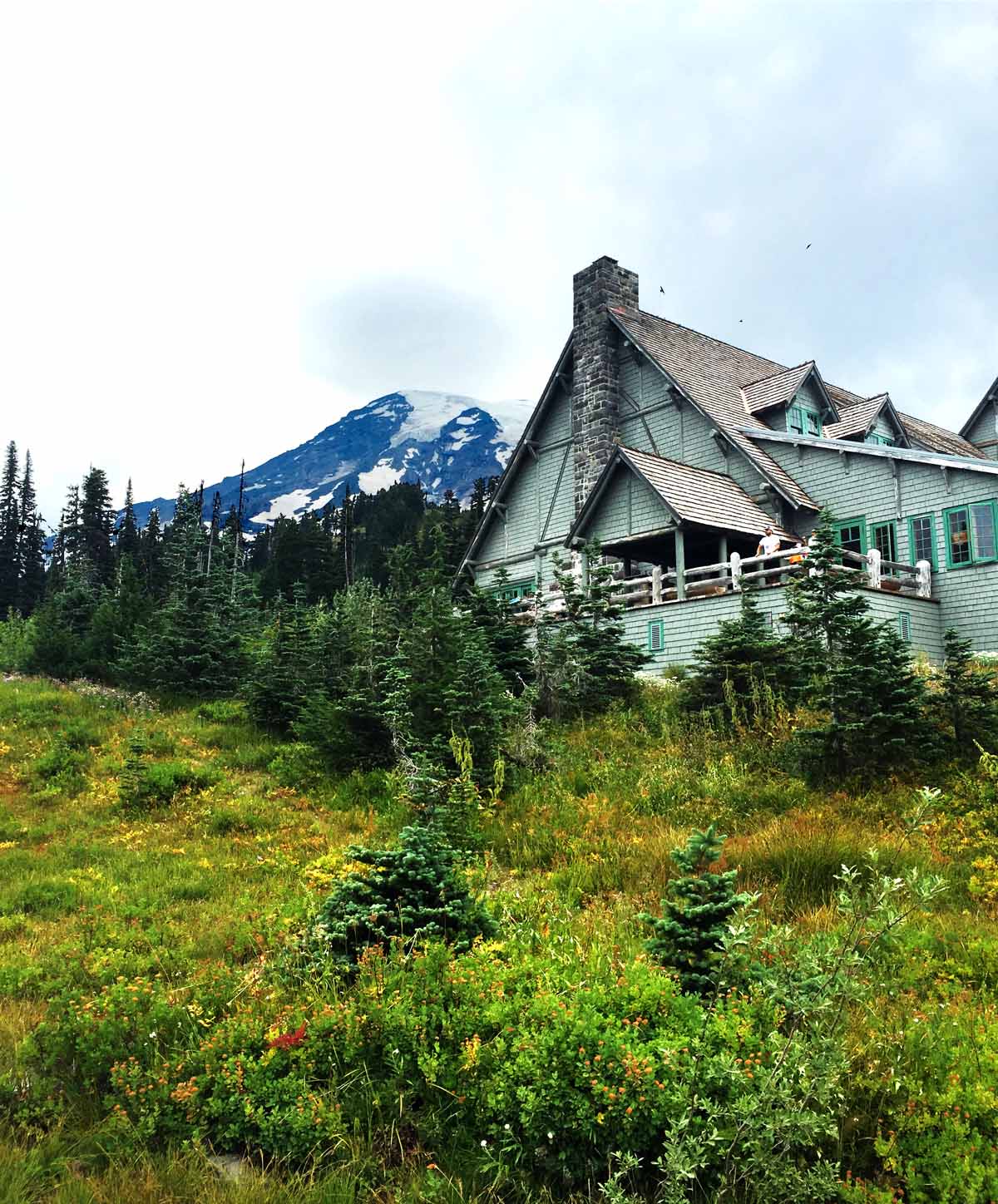 rom Yosemite to Glacier, there are many spectacular national parks in North America, especially out west.  In addition to the natural splendor, many park visitors have also been captivated by the rustic mountain architecture of the national park service, otherwise known as Parkitecture.

These buildings appear to be extensions of the very locations on which they stand.  The over sized boulders that make up their foundations seem to have been quarried from the nearby cliffs.  The old growth rough hewn timbers bearing their walls and roofs appear to have materialized from the adjacent forests.  Parkitecture draws from craftsman, Swiss chalets, Adirondack, and other vernacular forms of architecture, and is considered to be one of the early versions of today's Mountain Architecture.

Also known as "National Park Service rustic", there are many building types that exhibit parkitecture, ranging from museums, park headquarters, ranger's cabins, vista houses, and lodges.  While known for their rustic appearance, these mountain lodges in many respects are far from primitive.  They feature grand halls with massive fireplaces, decks and large windows with sweeping views, and fine dining halls.

At the beginning, during the era of the railways, these mountain lodges were catered to the elite who accessed the parks via trains.  Glacier, the Grand Canyon, and Yellowstone National Parks, specifically, were developed by railway companies. They provided a European traveling experience without need of a 5 - 9 day journey on an ocean liner.  Glacier National Park (in northwestern Montana), and its mountain architecture, was marketed by the Great Northern Railway as America's Alps or the Switzerland of North America.

The parkitecture style developed as the national parks grew.  Mountain architects such as Gilbert Underwood, Robert Reamer, and Mary Colter all left major contributions to the style. As both an architect and public administrator, Herbert Maier also left a significant impact, often with funding from the Rockefeller Foundation.

The Old Faithful Inn, located in Yellowstone National Park in Wyoming, is the largest log structure in the world.  Designed by Robert Reamer, it was built in 1904 with local, natural materials, including lodge-pole pine logs.

The inn is considered the first of the great park lodges in western America, and is situated such that when visitors arrive they can see directly towards the Old Faithful geyser.  Once inside they're greeted by a towering lobby with a massive stone fireplace and log trusses.

The Old Faithful Inn, in Yellowstone National Park (Google street view image.  For Mobile: pinch to zoom and swipe to pan. Tap the double arrow icon in the lower right to look around. This mode navigates as the user moves their device. For desktop: scroll to zoom in and out. Left click and drag to pan.)

During the Great Depression, president Franklin D. Roosevelt sought to provide work for the unemployed via the Civilian Conservation Corps (CCC).  This resulted in the construction of many parkitecture buildings such as the Silver Falls Lodge, the Mt. Spokane Vista House, and most notably Timberline Lodge on Mt. Hood.

Positioned just at the tree line's edge on the side of Mt. Hood, Oregon's tallest peak, is the famous Timberline Lodge.  From this prime location one has a front row view of of Mt. Hood, but the view in the opposite direction is also spectacular, with views of Mt. Jefferson and other peaks. Built during the Great Depression through Roosevelt's Works Progress Administration (WPA) this  74,000 square foot mountain lodge is no small accomplishment.  The building features a large two story hexagon room in the center with a dining wing to the right and bedroom wing to the left (as viewed from the main entry side).

Timberline Lodge is well known for it's rustic mountain craftsmanship.  Massive timbers make up the framing in the center hall. Each newel post has a unique animal carving.  The lodge's logo, a design rooted in native american heritage, is a snow goose in the weather vane on top of the central chimney.

In 1937 Roosevelt arrived in Oregon to dedicate the Bonneville Dam and Timberline Lodge.  As the president's forty vehicle motorcade neared Timberline, mounted Forest Service personnel lined the road to wave and salute him.  After arriving he took the elevator to the main floor, came out on the terrace known today as Roosevelt Terrace, and gave a speech on the value of our national forests and the benefits that this mountain lodge would bring to many future generations.

‍Paradise Inn was built in 1916 on the south flank of Mount Rainier, in Washington's Mount Rainier National Park.  Many climbers stay at the Inn before ascending the 14,411 foot (4,392 meters) high mountain.  Native materials were used and included cedar shingles, stone and weathered timbers salvaged from an 1885 fire.

Situated on the valley floor of Yosemite National Park (California), with magnificent views of the Royal Arches, Yosemite Falls, Half Dome, and Glacier Point is the Ahwahnee Hotel.  Built two decades after Yellowstone's Old Faithful Inn, this mountain hotel was intended to be a hotel decked with the finer things in life.  The Ahwahnee was the product of a group of architects, bureaucrats, visionaries, and businessmen.  Stephen Mather, most well known as the first director of the National Parks Service, was the lead on this project.  Mountain architect Gilbert Stanley Underwood, a graduate of Harvard, is responsible for the design.  When it was built in 1926 the construction cost was $1.5 million.  The hotel was recently renamed "The Majestic Yosemite Hotel" due to a disagreement with the national government and a concessions business.

Mather presided when the hotel opened in July of 1926. He got his grand mountain hotel in his favorite national park. The completed masterpiece stands as a testament to the talent of Underwood.  Each asymmetrical level of the six story core has a chimney.  The two wings are three stories each.  Though the hotel is very grand, it is humbled by the tall ponderosa, oak, and sequoia trees that surround it, and being located at the center of Yosemite Valley, its size is further minimized by the surrounding lofty cliffs.

The president of the Great Northern Railway, Louis Hill, stepped down in 1912, from his position as president, to develop the mountain lodges of Glacier National Park.  The Glacier Park Lodge located at East Glacier was the first of many mountain lodges to be built in Glacier. Since this lodge would be accessed via rail there is a train station just across the lawn.

‍Lake McDonald Lodge in Glacier National Park (Montana) was designed by architect Kirtland Cutter and built in 1913.  The lodge is one of the USA's best examples of large-scale Swiss chalet architecture.  It was built during a time when railroads wanted to attract tourists and create upscale destination resorts that were an equal to the extraordinary scenic areas.

Many structures were influenced by the National Park Lodges.   In Canada, the Jasper National Park Information Center, designed by Edmonton architect A.M. Calderon, was heavily influenced by Parkitecture.  This in turn influenced other buildings in the Canadian National Park system.  Built in 1914 and located in the town of Jasper, Alberta, it served as a landmark for passengers arriving on the Canadian National Railway, and still is the primary visitor contact center for visitors to the park.  In 1992 it was designated a National Historic Site of Canada.

Decades have gone by since the "glory days" of Parkitecture. Many of these beloved buildings are showing signs of age. As architect Steve Mouzon puts it, "If a building cannot be loved, then it is likely to be demolished and carted off to the landfill in only a generation or two."  Thankfully many of these buildings have lasted more than a generation or two, indicating that they may be here for generations to come.

Do you have a favorite work of Parkitecture?

For more on early mountain architecture, see Origins of Mountain Architecture in America.

‍Follow our blog with Bloglovin