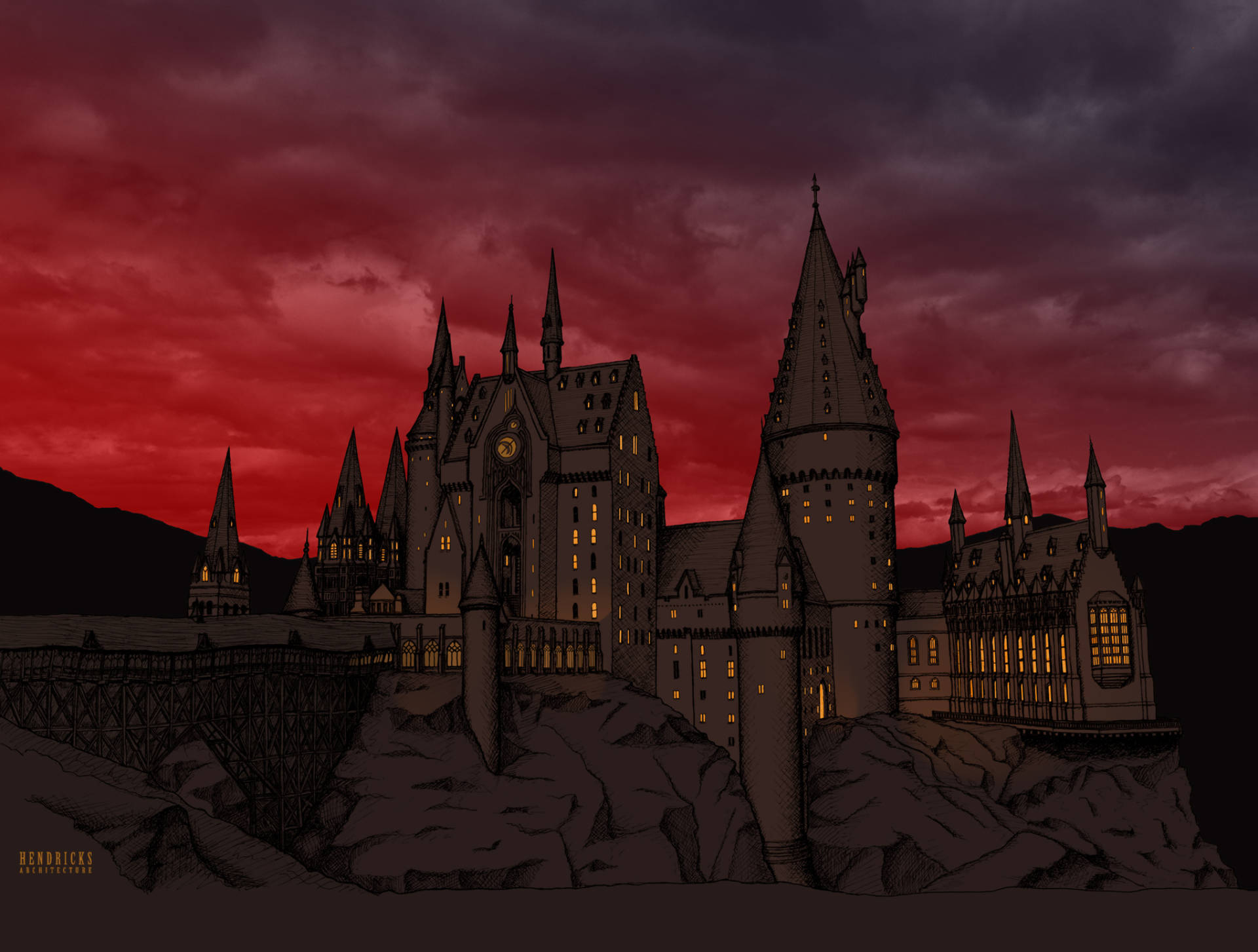 The Architecture of Hogwarts Castle

’ve always been fascinated with the architecture of Hogwarts Castle.  For those not in the know, “The Hogwarts School of Witchcraft and Wizardry” is a fictional British school of magic, and is the primary setting in the Harry Potter films.  The huge structure is an architectural wonder, even though it was never built, except in scaled down models and theme parks.

Hogwarts Castle was originally imagined by J.K. Rowling, the author of the Harry Potter books (yes, the books came before the movies), and designed by production designer Stuart Craig and his team.  All of them drew inspiration from various locations in Great Britain for the castle interiors and exteriors.

The style of Hogwarts has been called Medieval Gothic, but in actuality it is a mixture of several styles, including Norman Romanesque, Gothic and Gothic Revival.

In this post, I’m going to go over the places that were inspirations for Hogwarts Castle and/or were used as Hogwarts filming locations.  The large majority of these I’ve been able to visit.  Last summer I went with my wife and our three children to Great Britain, in search of these locations.

In actuality, Annie and I were very excited to see the history and architecture of London (among other things), and the rest of the Old-World country.  However, we didn’t want to bore our kids to death.  As they are all big Harry Potter fans (having read all of the books and seen the films), we looked up Harry Potter filming locations and added them to the itinerary.  Many of these locations turned out to also be historical architecture, so it worked out well for all of us.

‍In the Harry Potter world, Hogwarts has existed for over a thousand years, so the designers wanted it to look like it’s been there awhile.  There is no greater influence on Hogwarts than the castles and cathedrals in the United Kingdom. Probably the one location which inspired the production team more than any other was Durham Cathedral.  The design team mentioned that the cathedral was used as the basis for everything to the right of the viaduct.  In fact the twin square towers of Hogwarts are almost an exact replica of this stone structure, except for some added storybook exaggeration, including tall, pointy spires added to the tops.

The cathedral is regarded as one of the finest examples of Norman Architecture, which is England’s version of the Romanesque style. Major elements of this style include:

Before I go too far, I'm adding in a sketch (which was the base of our Hogwarts color rendering above) pointing out some of these architectural elements, as well as other elements still to come.

I should also mention that the element labeled "Tower" is actually the "Grand Staircase Tower". Something my daughter pointed out to me.

The Romanesque style began in Europe somewhere around the 8th century, and came to England through the Norman nobles and bishops in the 11th century. The Norman style was known to have more massive proportions than the Romanesque in other regions. It developed in the latter part of the 12th century into the Gothic style, where the arches became pointed.

Durham Cathedral, along with Durham Castle, were both built as an intimidating projection of the new Norman king’s (William the Conqueror’s) power. Both the cathedral and castle are strategically located in a defensive position on a high promontory above the City of Durham, in NE England. The River Wear flows almost completely around them.

Construction began on the Cathedral in 1093 and was completed in 1140. Key components which were later used at Hogwarts Castle include ribbed vaults, pointed arches and flying buttresses.  Interestingly, though Durham Cathedral is known largely as a Norman Romanesque design, those features appeared in the new Gothic architecture in Northern France a few decades later (in fact the ribbed vaults at Durham are the earliest on record).

This is most likely because of the Norman stonemasons who built the cathedral, and then passed it along to such structures as Chartres Cathedral in France, which was built from 1194 to 1250. The features were also new structural engineering feats, enabling the buildings to go taller, more elaborate and complicated, and allowing larger windows. Wizard’s magic in those days. ;-)

The one thing I regret is not seeing Durham Cathedral up close.  I'd like to give a big thanks to Les Bessant for allowing me to use his cathedral photos.  Though we could clearly see the cathedral from Durham below, we were running late on the way to our kid's broomstick training classes at Alnwick, so we didn't have time to make it up there.

‍Alnwick Castle, located about an hour’s drive north of Durham Cathedral, was used as a backdrop where the broomstick flying and Quidditch lessons were filmed, as well as where the Weasley’s flying Ford Anglia crash lands into the Whomping Willow.

The Castle, like Durham Cathedral, was also built following the Norman Conquest. It sits prominently between the River Aln (flowing on the north side of the castle), and a deep ravine to the southeast. Construction began in 1096, though it was largely rebuilt and remodeled throughout the centuries, as several wars played out and the castle passed through many different hands.

The castle seems to have been influenced by Durham’s Cathedral and Castle, starting in the Norman Romanesque style, then adding Gothic elements, and later Gothic Revival.  As with the Gothic architecture of other parts of Europe, English Gothic is defined by its pointed arches, vaulted roofs, buttresses, large windows, and spires.

Here's my kids after a successful class. Now I don't have to worry about buying cars for them.

If you ever make it to Alnwick, I strongly recommend checking out the Alnwick Treehouse, and making dinner reservations at the Treehouse Restaurant.  It's a fun experience for everyone, whether you have kids and/or still have any inner child left in you.

‍I believe no city had more influence on the design of Hogwarts than Edinburgh, Scotland.  J.K. Rowling moved here in the midst of writing the first few chapters of what would become Harry Potter and the Philosopher's Stone (Sorcerer's Stone in the US).

From the Palace of Holyroodhouse (one of the Queen’s residences), up to Edinburgh Castle, which towers above the town on a rocky promontory, the Old Town of Edinburgh has a magical feel, with exaggerated elements, mainly in the Scottish Baronial style, which incorporates components of the Gothic Revival style.

The Edinburgh Scottish Baronial elements which likely most influenced Rowling, and later the designer of Hogwarts, were the features of Medieval castles and the chateaux (manor houses) of the French Renaissance, and included:

Edinburgh Castle towers above the city on the plug of an extinct volcano. Just the sheer presence of it must have been an inspiration to Rowling for the image of Hogwarts. It was built and remodeled in various styles throughout the years. The earliest found settlements go back to at least the early Iron Age. The oldest surviving castle structure is St. Margaret’s Chapel, built in the 12th century.

‍Stirling Castle in Scotland is another of the castles said to inspire Hogwarts, and like Edinburgh Castle, mainly for its towering location above the landscape. It sits atop Castle Hill, is surrounded by cliffs on three sides, and dates back to at least the early 12th century.

‍In the first, second and sixth Harry Potter films, the corridors leading to Gryffindor House were filmed in the cloisters at Gloucester Cathedral.  Moaning Myrtle, Nearly Headless Nick, and a woman in a painting asking for a password were seen here.  This is also where Harry and Ron hid from a troll.

In a dark scene in Harry Potter and the Half-Blood Prince, Professor Snape slammed Malfoy against the wall (on the left, just beyond where the man is sitting below), saying, "I swore to protect you. I made the unbreakable vow", as Harry listens in the dark behind one of the columns on the right.

These same cloisters are the earliest examples of fan-vaulting in the world.

Built as an abbey church (and later dissolved by Henry VIII in the Dissolution of the Monasteries), construction began here in 1089 in the Norman Romanesque style. Later additions were in every style of Gothic architecture, and include the largest medieval window in the world.

‍Continued on: The Architecture of Hogwarts Castle Part 2