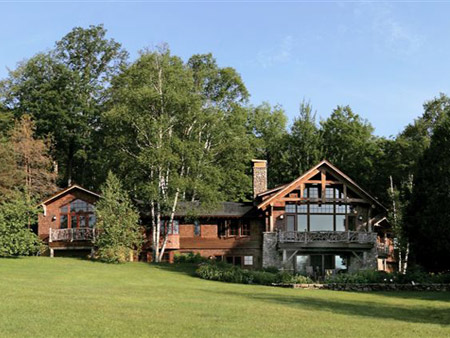 he Adirondack Style has had a strong influence on much of the Mountain Architecture we enjoy today.  When I was growing up in the Adirondacks, I knew very little about the rich history of the area.  Now, traveling back there as an architect with a lot more knowledge of the natural and built environment, I am able to really appreciate a lot of the things that I hardly noticed when I was younger. One of the things I enjoy the most is checking out the Adirondack style camps that have become iconic symbols of the region, especially the ones that are built along the shores of the numerous lakes.  My favorite place to go to learn about Adirondack history is the Adirondack Museum in Blue Mountain Lake, New York.

Until the late 1800’s, most of the Adirondacks were a rugged wilderness that few dared to venture into. As transportation routes slowly became established later in the 19th century, wealthy city dwellers started taking extended vacations there to recreate and escape from unhealthy urban environments. Early Adirondack accommodations were primitive at best, and as the demand increased more civilized shelters started appearing. The remoteness of the Adirondacks necessitated the use of indigenous materials for building, and abundant supplies of timber and stone made them the obvious choice. Sawmills and sophisticated fasteners were rare, so whole or half logs in easy to handle sizes and creative joinery became a part of the building process out of necessity.

As railroads started to penetrate the Adirondacks, many of the wealthiest industrialists of the time sought refuge in the clean air, numerous lakes and beautiful scenery of the area. They built grand lake lodges to house themselves and their guests, often as small campuses with separate outbuildings for sleeping or utility purposes. These so called “great camps” were built in a similar style using local materials and craftsman, and many of them are still standing and in service today.

William West Durant, son of railroad magnate Thomas Durant, is often credited with developing the Adirondack style, though some of the signature elements of the style had been used for some time in early Adirondack buildings. Here is an excellent short PBS video on Adirondack Great Camps.

The great camps exemplify the Adirondack style, which has influences from the Arts & Crafts movement, the Shingle style, and Swiss chalets. Rustic elegance is the hallmark of the style, achieved through artful use of native materials left as close to their natural state as possible. Common exterior elements include unpeeled cedar log siding and railings, square pane divided light windows, indigenous stone, intricate twig work, and ornate gable decoration.

Another common characteristic of the Adirondack style is buildings that harmonize with their surroundings. When the early great camps were constructed, large earth moving equipment was not available, and the rugged landscape forced the buildings to fit the land. The use of natural materials and earth tone colors helps to make true Adirondack style buildings appear to be part of the landscape, and the focus on recreation and outdoor living emphasize a connection to nature.

In classic Adirondack style, this grand lake home (photo below, also by RP Ledger Construction) is unassumingly tucked back into the forest. Unpeeled Eastern White Cedar railings and rustic timbers grace the exterior of this  Adirondack lodge home.

The Adirondack style is not strictly an east coast vernacular. Adirondack style homes and furniture can be found in many of the mountainous areas of the country. The Adirondack chair has become a fixture on cabin porches and docks all across America. Perhaps the most visible adaption of Adirondack style can be seen in some of the National Park lodges in the western United States.  The Old Faithful Inn, Glacier Park Lodge, and The Ahwahnee Hotel in Yosemite are among those with influences from the Adirondack style.

So called “Parkitecture” is a regional adaptation of the basic concept of using indigenous materials to create grand buildings that offer rustic luxury and promote engagement with the outdoors.

At Hendricks Architecture, we specialize in designing western mountain style lodge homes that take some inspiration from the Adirondack style. Having grown up in the area and worked on some old Adirondack camps when I was a young carpenter, I have a deep appreciation for the style. I am fond enough of it that I have designed an Adirondack style cabin that I plan to build on my property here in Sandpoint, Idaho. Anyone who has been to both the Adirondacks and North Idaho will know how similar the two places are.  I think an Adirondack style lodge or cabin would be a great fit for the heavily forested lake country of the Idaho Panhandle. If you have an interest in an Adirondack style home or any other Arts and Crafts inspired mountain home style, we would love to talk to you about your plans.

Choosing Windows for Your Home