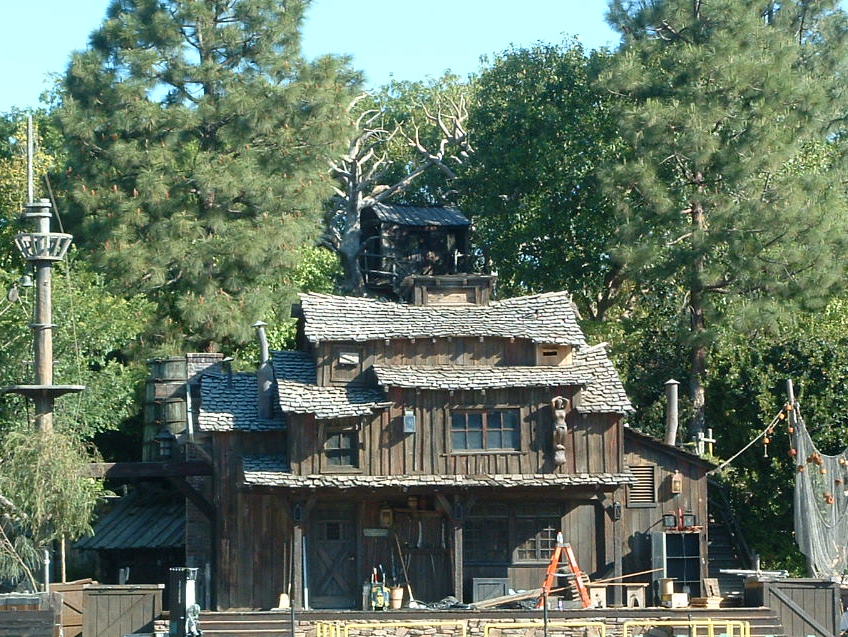 fter visiting Hollywoodland and the Hansel and Gretel cottage, the last stop on our spur of the moment Southern California Storybook style tour was a family trip to Disneyland. We actually made the trip to see family and friends, but I owed a Disneyland day to my wife and kids after architect dad dragged them to the other places. Besides, Disneyland has some fun Storybook style architecture of it's own, and arguably the most whimsical and imaginative. This particular style is sometimes referred to as the Disneyesque style.

I have to admit, it was nice to see the rustic landing dock building on Tom Sawyer's Island in Frontierland, which reflects a little of the mountain style I design. I can only imagine what it would be like to integrate the mountain style with the Toontown style.

When I was in grade school I was fascinated with the architecture of Disneyland. I loved that the Pirates of the Caribbean had fun, yet authentic exterior architecture on the interior. Plus the fact that every "themed land" at Disneyland had it's own architecture, and in these were villages with their own separate architectural styles.

When I graduated from Texas Tech in 1990 I had job offers, but I still sent resumes to Frank Gehry, as well as Disney's Imagineering department. Architecture without limits seemed like the way to go. We were in a mini-recession, and Gehry's receptionist told me they had a stack of resumes two feet high. Disney sent me a postcard of Mickey Mouse, who kindly told me they weren't hiring.

I eventually took a path into the mountain architecture style, where there are a few limits. Snow loads, for example, are something you don't need to worry about in Disneyland.

The architects and engineers in the Imagineering department have done a great job throughout the years. They truly have no limits, designing whimsical approaches to historic architecture, or creating exaggerated storybook images. The former in places like New Orleans Square and Fantasyland, and the latter in Mickey's Toontown.

Mickey's ToonTown is a newer "themed land" in Disneyland, opening in 1993. The colorful, wacky, skewed, completely off plumb architecture in ToonTown captures the imaginations of children and many adults as well. Ironically enough, this area, partly themed after Roger Rabbit's hometown, was originally considered to be named Hollywoodland, an historic storybook themed neighborhood in Los Angeles.