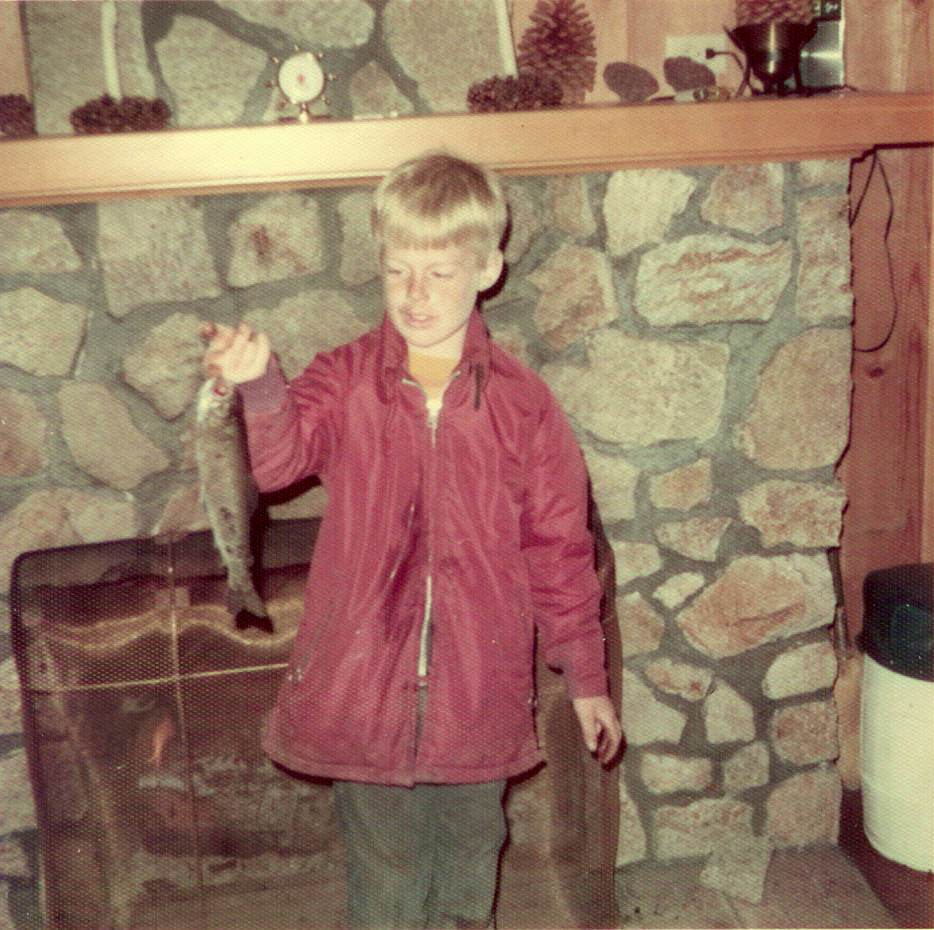 The Family Cabin at Huntington Lake

’ve designed a lot of family cabins as an architect.  Each cabin is custom-made for each unique family and its individuals.  The goal is typically to build a comfortable and special place that will become a home base for fond memories, and I do my best to pick our client’s brains to achieve that objective.  I have experience on both sides of the issue, so I thought I’d share some experiences I’ve had in the family cabin where my siblings and I spent our childhood summers.

Our cabin was located at Huntington Lake in the Sierra Nevada Mountains, about halfway between Yosemite and Kings Canyon National Parks in California.  The cabin wasn't exactly a masterpiece of mountain architecture.  The main level consisted of a mudroom/pantry, a small kitchen around a built-in dining table, a bathroom, small master bedroom, and a fairly large living room (great rooms weren’t invented yet) with a high vaulted ceiling.  This ceiling was not held up with the large architectural timber trusses we commonly design today, but with trusses made up from a conglomeration of patterns made out of 2x6’s, which later had to be fortified after the roof started sagging.  We had a 12:12 (12” vertical to 12” horizontal) roof pitch, which was ample enough space for a second bedroom upstairs.  All the walls and ceilings were pine, which was very common way back in the 20th century.

The three of us brothers let our sister take the bedroom in the summers.  We slept outside in an army tent.  With four cots on the perimeter and two spaces on the floor, there was ample space for friends and cousins as well.

I was seven years old when we moved in, and we spent a lot of those first few summers’ trout fishing.  We’d fish off docks and our secret “fishing hole”, and would catch enough for some large pan-friend trout dinners.  We also caught a few sucker fish.  An elderly couple in a nearby cabin kept a garden and would pay us 5 cents for every sucker fish we caught.  It was mutually beneficial.  They would use the sucker parts for fertilizer, while we’d save up our nickels to buy comic books, which were only 25 cents back then (all of a sudden I feel really dated writing this).

We’d walk a couple miles through the woods and cross a big log over a stream to get to the store at Cedar Crest Resort.  Cedar Crest had plenty of comic books, where I began buying Casper and Richie Rich, and later moved on to Marvel Comics (Captain America was a favorite) and Mad Magazine.  Evenings would be spent reading or playing games.  Poker, Monopoly and Mystery Date were favorites that the previous owners had left us.  Yes, Mystery Date.  I did mention we have a sister.  We had a lot of laughs with this one.  The previous owners also left us stacks of National Geographics, Little Lulu comics, and Mad Magazines from the 50's and 60's.  That's where I learned all my culture, despite my dad's best intentions taking us to the Fresno Philharmonic concerts.

My parents had a San Juan 21 sailboat and would use that for cruising and racing.  Huntington Lake is known as one of the best sailing lakes around, and every year holds the High Sierra Regatta, which pulls in top quality competition (about 150 boats each weekend including some Olympic sailors) for two weekends.  My brothers and I started off racing in 8 foot flippers, and eventually moved up to Lasers and crewing (and skippering) on the bigger boats.

The San Juan 21’s were among those racing the first weekend.  The week preceding the races was always my favorite week of the year.  There were about twenty San Juan’s in the fleet, and we were all good friends.  Every night a party would be held at one of the owner’s cabins.  For some reason our party was always held on Thursday nights.  The adults would always have a rousing good time (for some reason a few seemed a little groggy the next day), while us kids would go off into the night after dinner, playing “spotlight” going to “the swing” or playing “spoons”.  Later, as the boys came to appreciate the girls a little more, we’d go to Lakeshore Resort to go dancing, where old Charlie Hull was the DJ.  He was the entertainment director from the 1940’s through the 80’s, and made it a lively time.

In August the action at the lake would cool down a little in the sailing world, so we’d sometimes go backpacking deep into the Sierra’s for a week at a time.  My dad was an Eagle Scout, and he taught us a lot about living in the backcountry, which served me well later as I continue taking friends and family back into the wilderness.  Sometimes we’d set up a central base camp and hike from there every day, but usually we’d do a big loop through places we’ve never been.  In our high school years just the boys and my dad would go (my sister had no interest and was old enough to say no).  My younger brother and I played football and our coaches would get upset that we weren’t in the gym lifting weights.  They didn’t understand that we were getting a lot better workout than our teammates!

The roads were not plowed in the winter so we would ski in about four miles once or twice a year to shovel the snow off the roof (those trusses made of 2x6’s!) and deck, and to one of the entry doors.  The Sierra winters can be brutal, and I remember one winter where we couldn’t do the whole roof, even though it was a fairly small cabin.  Some winters we could touch the snow from the second level bedroom window.

One winter it snowed so much that the roads weren’t plowed within thirty miles of the cabin, but just to the top of the four lane highway.  So we proceeded to ski up and down the highway (not much traffic and I was only about 13).  I was skiing down the highway by myself when the highway patrol pulled me over.  They took me back to the car and admonished my dad without giving a ticket, who then cursed them after they left.

In the late 80’s we had to sell the cabin.  The buyer quickly remodeled and added on to it.  I’ll always remember the way it was though, and could design the same cabin from memory if I wanted to.  I probably never will as it wasn’t the most efficient or the best design.  But for about fifteen years it was the best cabin there ever was.

Please visit our selected projects page for some of our more recent projects.

‍If you have an interest in having a cabin designed, or in talking about the good old days at Huntington Lake, please feel free to call or email me, or contact me on our Contact Page.