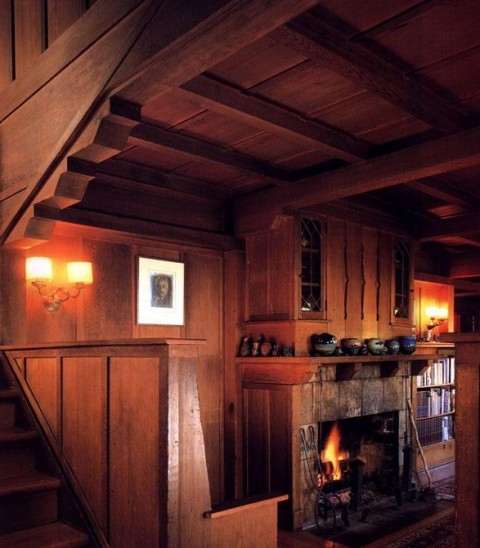 f you take a walk through the older neighborhoods of any American town, you are likely to see examples of homes whose designs were inspired by Arts and Crafts style architects. The Arts and Crafts architectural movement was a philosophy of design that influenced not only architects, but furniture makers, artisans and domestic handicrafts as well. Begun as a response to the mechanization and mass production of the Industrial revolution, followers of the Arts and Crafts movement promoted the value of natural materials, skilled craftsmanship, economy of form and honest expression without applied ornamentation.

The Arts and Crafts movement began in Britain in the mid to late 1800's, and came to America just before the turn of the century. One of the first Americans to adopt the principles was Gustav Stickley, the well known furniture designer. Considered the founder of the Craftsman style (a descendant of the Arts & Crafts Style), Stickley was highly influential in spreading the philosophy of Arts and Crafts through his periodical "The American Craftsman". He emphasized simple, clean lines, exposed artful joinery, the virtues of handcrafting, and unadorned natural materials.

Besides creating elegant furniture, Stickley partnered with the architect Harvey Ellis to create popular Bungalow style home designs that were published in catalogs and became widely known as craftsman style bungalows. Some of the hallmarks of the craftsman bungalow were:

In the early part of the 20th century, complete bungalow home kits could be bought from catalogs, including Sears and Roebuck. Many US cities and towns have older neighborhoods full of these "modern" homes.

In the Pasadena area of Southern California, two brothers, architects Charles Sumner Greene and Henry Mather Greene, took the bungalow and the Arts and Crafts philosophy to extremes in their stick style homes. Every detail of these homes was meticulously designed and crafted, featuring beautiful exposed timber connections, lots of native wood, and indigenous stone on the exterior. Greene & Greene'swork has become iconic as the ultimate expression of Arts & Crafts ideals in home design, where the home is a complete work of art with every detail and furnishing designed by the architect.

Frank Lloyd Wright's Prairie School style homes are also based on principles of the Arts & Crafts movement. One of America's most famous architects, Wright developed a unique style that drew from many of the ideas of the Arts & Crafts movement, including open plans, emphasis on natural materials and connection to the environment, forms inspired by nature, and lots of wood built-ins. Wright's organic style was an inspiration to many American architects, and many of his homes are still considered fine examples of Arts and Crafts philosophy in practice.

A contemporary of Wrights, architect Bernard Maybeck, designed many homes in the Arts and Crafts tradition, most of them in the hills above Berkeley, California. Maybeck had an eclectic style and whimsical nature, often mixing modern design with classical details. He was adamant about letting the building materials and quality craftsmanship be the ornamentation, and typically used carefully detailed redwood as both interior and exterior cladding. Some elements of the shingle style are evident in his designs.

Because of its enduring appeal and continued popularity, many architects still design using principles and forms that emerged during the Arts and Crafts movement. The Craftsman style and Prairie style were two of these Arts & Crafts siblings. Others included later versions of the Shingle style, Adirondack and Swiss Chalet styles (which all also had various influences on the Mountain architectural style), and to a lesser extent the Eclectic styles of the Tudor and French Eclectic (and it's cousins the Cotswald Cottage and the less rigid Storybook style).

The beauty of natural materials, quality craftsmanship, thoughtful design, and honest expression are still valued today, as is the connection many people feel with these iconic building styles. As new materials emerge and styles evolve, the look of buildings will inevitably change. However, the influence the Arts and Crafts movement had on American domestic architecture will continue to be evident in the design of our homes for many years to come.

‍Hendricks Architecture designs Arts and Crafts inspired mountain homes and cabins throughout the United States. Visit our portfolio for examples of some of our recently completed custom projects. If you are interested in an Arts & Crafts style home, or you have any other inquiries, please contact us.