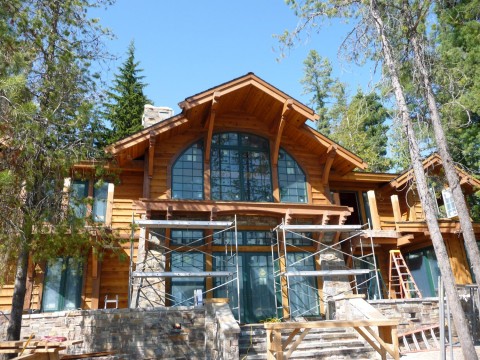 un orientation and the ability to control it are important in looking at specific sites.  Whether it’s by architecture or other means, the power to harness the sun’s energy and limit the detrimental effects can make a huge difference between a good site and a bad one.‍

The Climate and Microclimate

‍Before going into detail on controlling the sun, it’s important to know the effects of different climates and microclimates.  In general, a big reason you’re choosing an area to live is you may love the climate of the cooler mountains, the warmth of the desert, the smaller temperature variations near oceans, the low humidity, the fact that it’s in a “Banana Belt”, etc.

Each site also has its own microclimate.  Sometimes they can be quite pronounced even from one neighbor’s property to the others.  For example, spring arrives earlier on sloped sites facing south.  Because of the solar radiation and optimal sun angle, they will be warmer, and snow will melt faster. In the summer these sites will be cooler than flat sites when the sun is directly overhead.  Thus the more exposed and closer to 90 degrees a site is to the sun, the warmer it will be.

Trees are also a big factor.  Trees blocking the sun will help keep homes cooler.  Fir trees will provide this year round, while deciduous trees will block heat in the summer, but without the shade of its leaves will warm the house in the winter.  Trees can also provide wind breaks from cold winter winds. I’ll describe wind affects in more detail in a later post.  Trees may obviously be planted, but might take some time to grow to become efficient.

Similar to cities next to large bodies of water, a house next to a pond or pool can also moderate the temperatures.  The same can be said for soil type.  Softer soil with more air pockets freezes more often, whereas hard soil can moderate the surrounding air temperatures similar to concrete.

‍Sun Orientation – The Angle of The Building

‍All things being equal, houses facing south are optimal for facades with more windows.  With large overhangs these will be cooler in the summer and warmer in the winter.  Those facing a little more to the southeast are more efficient than facing southwest, as more solar radiation is gained in the morning, versus the warmer afternoons.  Homes in all climates are more efficient when elongated along the east/west axis than those on the north/south axis.  In cold climates, the less elongated the better.  If a home is lived in only a part of the year, note that southern exposures are more important in the winter than in the summer.  It’s also typically more efficient to place living areas facing south, with the bedrooms facing north.  However, it seems like views and other factors tend to be more important to most owners.

Another thing to note when buying a property – make sure that there is no danger of homes or other buildings, now or in the future, that will block your views of the sun. You might want to check (or have your architect check) into the zoning regulations on adjacent lots.

‍As I mentioned, larger roof overhangs will let in more winter sun and less in summer.  Trellises are also helpful, and have the same effect when designed correctly.  The most natural way is to plant, or nestle up to some existing deciduous trees.  The trees in the winter are bare and let in lots of sun, while in the summer they’ll block the sun’s rays.  Blinds inside the house help as well, but aren’t quite as effective as those elements located on the exterior.

Recently we designed a home on lakefront property.  The owner wanted a big glass wall with a gable roof facing the lake, where the best views were. This would help in the winter, but in the summer had the potential to rack up some enormous air-conditioning bills.  We made the gable overhang a little larger than normal, added a trellis, and also specified some performance glazing.  In this case, Cardinal LoE-366 glass was used. This has a slight tint to it, rejects more solar heat and provides more insulation than typical window glazing. See photo below of the home in construction.

]See our post relating to energy efficiency for further information on harnessing the sun's energy.  Energy.gov also has a good article relating to the topic of passive solar home design.

‍Another positive impact of the sun is providing natural daylight into the home.  This not only can create a mental uplift (unless you enjoy living in dungeons), but also saves on your energy use.  We designed a home on a property that faced north of a mountain, with the best views facing north over a lake.  This home has great views facing north, but little privacy (a road) and sun exposure.  We added as many windows as we could on the south side, while keeping them high for privacy.  We also added a cupola with windows, which along with the others, provided plenty of natural light, while reducing direct glare.  The owner has given us permission to show her house in the past.  One or two potential clients have asked me on our way out why I didn’t turn off the lights, to which I replied, “I didn’t turn any on”.

Other ways to increase daylighting include:

‍Hendricks Architecture has designed homes throughout North America of varying styles.  We do our best to design beautiful and practical homes, while at the same time educating our clients on the benefits of good site selection and energy efficiency.