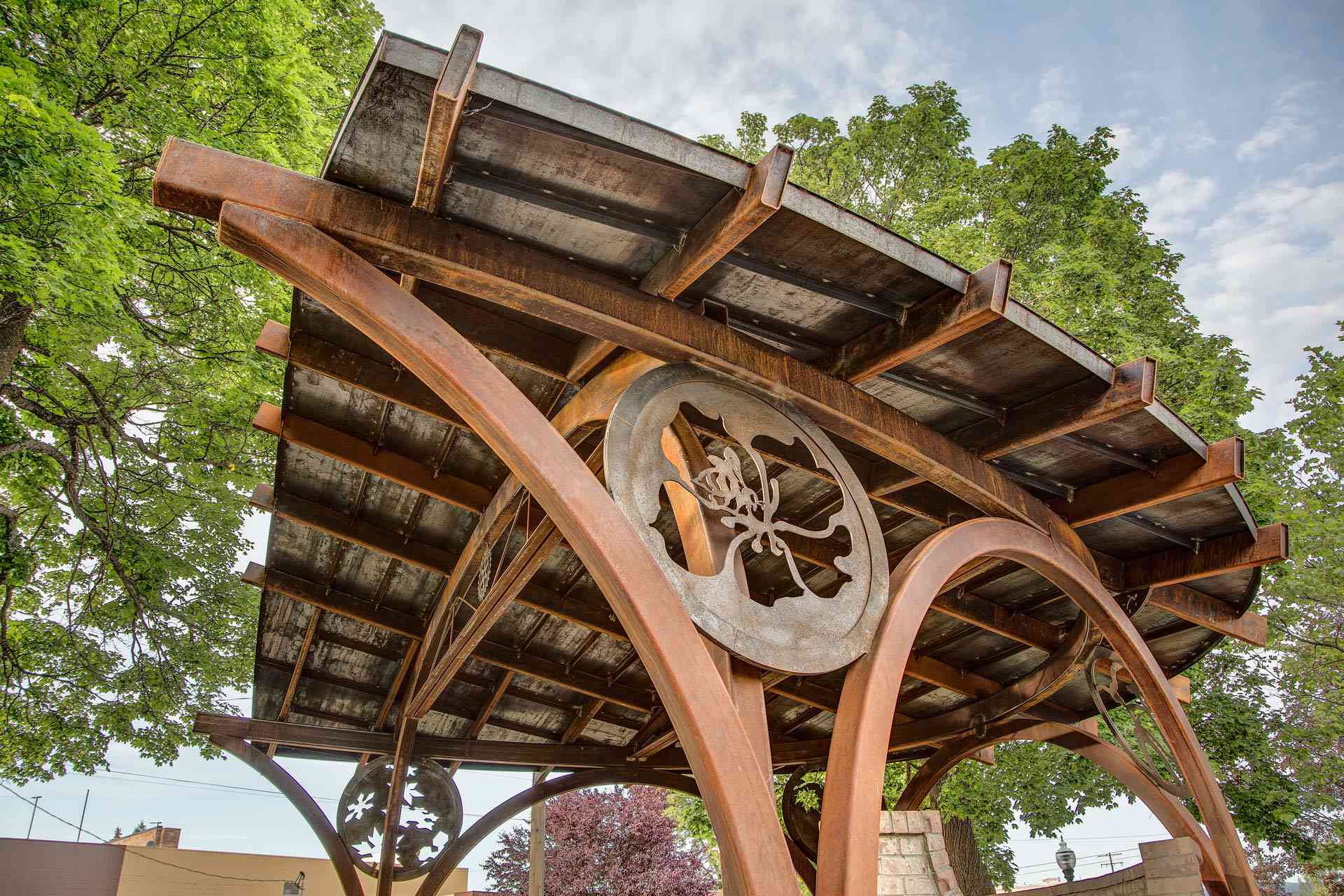 steel bandshell designed by Hendricks Architecture was recently completed in Sandpoint’s Farmin Park.  Sandpoint Rotary asked us to work with Parks and Recreation director Kim Woodruff to design a replacement option for the park’s bandstand roof.

The tasks we were given were to fit the structure within an existing circular brick base, keep the performers dry, be durable, low maintenance, and fit architecturally and aesthetically into a park in the heart of downtown.  We were also challenged to make the structure a unique and a one-of-a-kind piece of art.  In addition, we wanted to make sure it was acoustically viable for the musicians, despite the steel structure.

In an initial brainstorming meeting with Kim and structural engineer Carlos Suarez, we talked about the possibility of using steel instead of wood for its longevity and low cost maintenance factor.  Kim suggested I meet with talented local steel artist Tom Brunner onsite to put our heads together.  I met with Tom the next day, our ideas clicked and within about 15 minutes we had the basis for the design.  I threw some quick sketches together (one shown below) and the next day we (Kim, Carlos, Tom and I) were all in agreement on the conceptual design.  The following day Tom threw together a small scale steel model, which became effective later on in getting approvals from various City committees.  The next steps were to secure funding, and end up with stamped construction documents to assure public safety.

The design is based off the existing curved bandstand, from the columns to the beams, to the purlins and other support elements.  We wanted it to be more organic than to just add a linear roof over it.  Carlos was given the tough task of trying to make the shell stand upright through the toughest snow and wind storms.  Carlos ended up donating about 80-90% of his time.  It ended up being a very time consuming project, but I think for both of us it was a fun puzzle to solve.  Tom Russell of Hendricks Architecture served as the project architect and was able to make all the pieces come together, including a 3D rendering which helped gain approvals.

The purlins (the steel running right to left under the roofing – some nearly reaching fifty feet) were also designed to be curved, but in the end, we decided to make them straight.  This was a painful compromise, but to curve each of them would have increased the price significantly, not just from curving the steel, but mainly because the roofing would have had to be intricately cut and laid over some very complex curves that bend in more than one direction.  This would have become very time consuming to build, so the purlins are straight, but are laid out in six segments each so they at least hint of a curve.  The structure is all steel, while the roof is corten steel.  Eventually the entire structure will have a nice rust patina.  The bandshell shouldn't need any major maintenance, and should outlive all of us.

One of my biggest concerns was the acoustics.  Exposed steel is not a material typically used in theaters or other music venues, as sound tends to reverberate off steel.  We certainly didn’t want to amplify the sound too much and to the detriment of local businesses and neighborhoods.  The existing base had curved walls which angled out towards the park’s music audience, so we emulated that in the roof structure.  We angled the roof up, as well as limited steel in the sound path to allow music to escape easier.  Still, I was a little nervous as the construction was pretty loud at the points when they had to put hammer on steel.  I was relieved to actually hear the musicians play and find it sounded pretty good.  I’ve heard from a few that the sound is better than it was before, and worst case, the same as before.

All the consulting work Tom Brunner (the steel artist) did initially was at no cost. Tom also designed the artwork in the four structural steel rings, where each symbolizes one of the four seasons.  Most of the team donated a lot of their time and offered reduced rates to get this built.  Sean Fitzpatrick (a fellow Rotarian) acted as the general contractor.  Wayne Bistodeau of Multi-Trail Enterprises, framed the steel structure in his shop, then disassembled it and put it together on site.  Apex Construction, CE Kramer Crane and Contracting, DSS Construction, Glahe and Associates, North County Electric, and Pacific Steel also contributed towards the Rotary project.  Several other Rotarians contributed their time on this, including Presidents Paula Parsons, Jerri Anderson and Bob Linscott, the community service head and a former architect.

The bandshell was funded by the Sandpoint Urban Renewal Agency (SURA) and Rotary.  SURA financially supported the project acknowledging that, though more costly on the front end, the long-term investment was best served with the steel structure.  Sandpoint Rotary requested funding and it was granted in late 2012.

Many thanks as well to Marie Dominique Verdier for her beautiful photography!  See our Facebook page for more photos.

John Hendricks is an AIA architect at Hendricks Architecture.