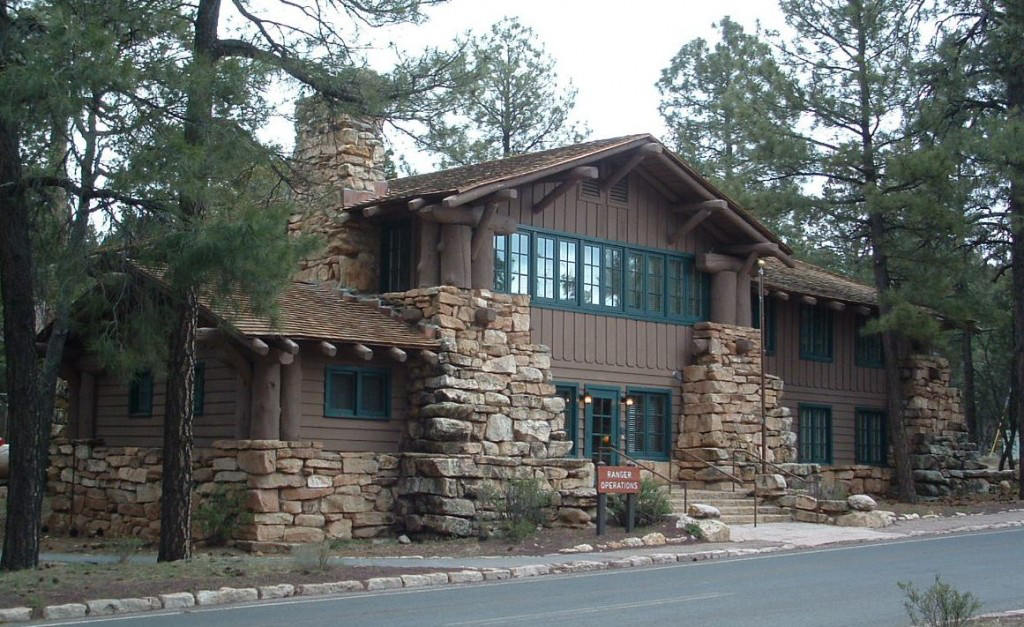 Origins of Mountain Architecture in America

hile mountain architecture is not the only type of work we design, most of the homes we've completed are in mountain resort areas, and most of our clients are looking for mountain style homes, often fairly rustic. Mountain Architecture is a broad term used to describe this rustic style of building, and can be found throughout the western United States and Canada, and in some of the mountainous areas of New York, New England, and the Southeast. For a detailed description of the current style, see Mountain Architecture.

The origins of mountain architecture in America came from the earliest non native peoples who chose to venture into the untamed mountainous areas of the country. The structures they built were a direct response to the environment they were in. They had to be made from native materials because transportation means were primitive, and they had to be robust to withstand harsh weather and deep snow. Often the homes were adapted, pragmatic derivatives of homes they had seen or experienced in old Europe or the cities of the Eastern United States. Civilization was slow in coming to the mountains, and early buildings reflected this. Unmilled logs, rough timbers, and natural stone were the norm, and the rustic beauty of these materials became a part of the style.

One precedent for the mountain architecture we see today began during the industrial revolution in the late 1800's. In the Adirondack Mountains of New York State, wealthy, educated city dwellers would retreat from the crowded eastern seaboard cities to grand "Great Camps" that were being developed around the numerous lakes in this rugged, untamed wilderness. This early version of "adventure travel" fueled a boom of construction, and grand waterfront lodges that were both lavish and rustic were built on most of the major lakes in the region.

The camps of the Adirondacks were constructed of native stone and logs or rough hewn boards, often with the bark still on them. Ornate stick-work railings, siding, and furniture were hallmarks of the style, as was creating the appearance of "roughing it" while living quite comfortably in a rugged setting. Adirondack rustic is a distinctive regional style that has endured and is still popular today.

Other notable examples of early mountain style architecture can be found in some of the National Parks in the western US.  Before automobiles were popular, people would travel by train to visit the national parks of the west, and grand lodges were developed to house the numerous visitors.  Iconic buildings like the Old Faithful Inn in Yellowstone, The Glacier Park Lodge in Montana, The Crater Lake Lodge in Oregon, and the Paradise Inn at Mt. Rainier were pioneering examples of the mountain style on a grand scale.  This architectural style came to be known as Parkitecture.

The Ahwahnee Lodge in Yosemite National Park is a great example of how rustic charm and refined elegance can be brought together and designed to harmonize with its surroundings.

Modern mountain style homes borrow from many different architectural styles. Depending on the Architect, there may be elements of Craftsman/Arts and Crafts, Shingle, Bungalow, Chalet, Prairie, and even early Japanese style in the design. Agrarian building elements like pointed gables, rusted corrugated metal cladding, and wood plank doors are also common in some areas. Regional variations to the mountain style have evolved, often in response to climatic conditions in a particular area. Styles in the mountain west include Colorado Territorial, Montana Ranch, Southwestern, and Pacific Northwest. We have designed homes that borrow from all these styles, depending on where they are located and client preference.

The unique appeal of well designed mountain style homes comes from purposeful use of natural materials, a connection with the outdoors, the appearance of having "grown from the site", and a strong sense of shelter from the elements. Since people first ventured out of the cities to recreate or live in the mountains, they have found creative ways of using native materials to create buildings that combine the romance of a frontier homestead with the comfort and conveniences of modern life. That is the essence of mountain architecture.

For those interested in a more comprehensive history of mountain architecture, an excellent source is Tom Deering's Masters Thesis from the University of Washington archives. Tom Deering is currently practicing architecture in the Seattle area.

See also recent mountain architecture photos and renderings. If you are interested in having us design you a mountain home, or you have any other inquiries, please contact us.

The Architecture of Hogwarts Castle

Why Design a Custom Home?