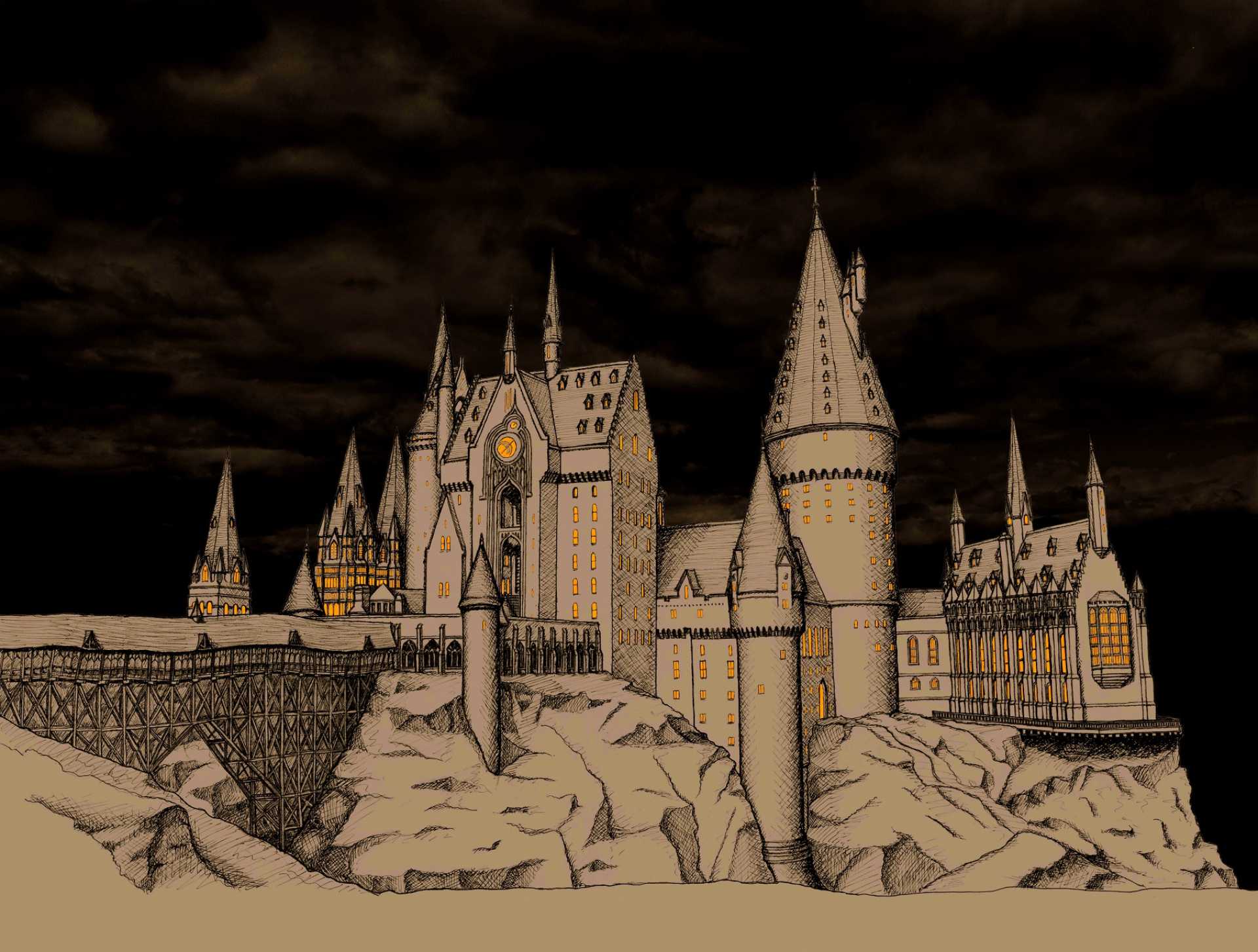 nyone who has children, has seen the Harry Potter films, or read the books, should be familiar with Hogwarts Castle, home of the fictional “Hogwarts School of Witchcraft and Wizardry”.  Even if you haven’t, it’s still a sight to see if you like cool architecture and castles on the whimsical side.  In our last post we talked about the Architecture of Hogwarts Castle and its influences, including Durham Cathedral, the City of Edinburgh (and its castle), and Gloucester Cathedral.  I’m going to continue that here, and will again include associated Harry Potter filming locations.

I should point out that I've always been drawn to castles (and cathedrals), along with their architecture and history, which, luck has it, the Harry Potter films draw from with some creative touches. No residence is more formidable than a stone-built castle that can withstand the elements for hundreds of years, and sometimes thousands of years when well kept.  Some of the most formidable, in my opinion, are located in Western Europe, and I've been lucky enough to to tour many of these.

Before filming began on the Harry Potter series, production designer Stuart Craig was given the enviable job of designing the perfect castle to mimic J.K. Rowling's vision of Hogwarts in the previous books, and the ones not yet written. The finished product was a castle model scaled down to the size of a small house, and was used in the films for every imaginable shot showing Hogwarts (when not able to film at actual locations, such as Alnwick Castle in our previous post).  I visited the Hogwarts castle model and studied the drawing details on two different occasions.

‍Westminster Abbey was one of several imposing British medieval cathedrals that Craig and his team studied before designing Hogwarts Castle.  Located in London, the English and British Kings and Queens have been crowned here since 1066.  Westminster Abbey has also been the location of sixteen royal weddings, and is the burial place of some of the most famous people of all time.

A church has been at the site since the 7th century, according to tradition.  Around 1050 a remodel and addition began (see Old World Architecture: Doors of England for Britain’s oldest door, part of the older structure).  In 1245, on the orders of Henry III, the current abbey was added onto extensively in the Gothic style,  which is defined by its pointed arches, vaulted roofs, buttresses, large windows, and spires.

Henry VIII assumed control of the abbey (and granted it the status of cathedral) in 1540, during the Dissolution of the Monasteries, in order to prevent it from being destroyed.  This was very convenient for him, since it was less than a half mile from his main home at the Palace of Whitehall.

The Abbey’s two western towers were built between 1722 and 1745, in the Gothic Revival style, which was based off the Gothic style, and included finials, arched windows, lancet windows, and label stops (hoodmolds over the arched windows to draw water out to the sides).

If you ever make it to London, Westminster Abbey is a “must see”, and not only for the architecture.  The abbey is adorned with ornate tombs of some of the most famous British people in history.  Queen Elizabeth, numerous other kings and queens, Sir Isaac Newton, Charles Dickens, and composer George Frideric Handel are among those buried there.  William Shakespeare, Sir Winston Churchill, Jane Austen, Laurence Olivier, Alec Guinness (probably best known as Obi-Wan Kenobi in the original Star Wars films), and Martin Luther King Jr. (who of course was not British) are among those with statues or memorials.

‍Westminster Hall and its large timber trusses were used as inspiration in designing Hogwarts’ Great Dining Hall, the majestic hall which figures prominently in the Harry Potter films.  Erected in 1097, Westminster Hall was at the time the largest hall in Europe.

Redesigned in 1393 with some very large oak hammerbeam timber trusses, Westminster Hall has the largest clear span medieval roof in England, and the largest timbered roof in Northern Europe.

The above rendering is a Wikipedia Creative Commons 19th century drawing of the interior of Westminster Hall.  I took the family to London last year, but we were unable to make it inside the hall because of a holiday party. Below is a photo I took from the south of the exterior.

Westminster Hall is the oldest existing part of the Palace of Westminster, which was once the primary residence of the Kings of England until a fire destroyed most of it in 1512, and again in 1834. Architect Charles Barry designed the latest rendition in the Perpendicular Gothic Revival style.  This style emphasized vertical lines, as well as large windows with elaborate tracery, and fan vaulting.

The Palace of Westminster is now the meeting place of the two houses of Parliament of the United Kingdom, the House of Commons and the House of Lords.  Above is a photo I took of the Palace of Westminster from the London Eye.  Westminster Hall is located under the dark grey roof beyond and to the left of Big Ben.  Incidentally, Big Ben is actually the massive bell, striking every hour, inside the famous clock (the largest clock in Britain) on The Elizabeth Tower.  Many refer to the tower collectively as Big Ben.  The London Eye is Europe's tallest ferris wheel, and gives you great views of London, as far as the 2012 Olympic Stadium to the northeast, and Wembley Stadium to the northwest.

‍For further inspiration in the design of Hogwarts, the filmmakers studied the architecture of Oxford, the oldest university in Britain and the English speaking world. Several locations at the University of Oxford were used as Hogwarts interiors in the Harry Potter films, as well as a few exteriors.

Oxford is located about 50 miles west of London.  It was established around the year 1096, making it the oldest English speaking university in the world.  Some famous graduates include J.R.R. Tolkien (Hobbit, Lord of the Rings), Lewis Carroll and Stephen Hawking, along with several Prime Ministers, most recently Margaret Thatcher, Tony Blair and David Cameron.  Believe it or not, Hugh Grant, Dudley Moore and Kris Kristofferson were also among those graduating from Oxford.

Emma Watson (Hermione Granger in the Harry Potter films), was raised in Oxfordshire, and is an honorary Oxford Fellow.  Having been cast for the role when she was nine, she didn't have much use for a university degree back then.

Incidentally, J.K. Rowling took the entrance exams to Oxford, but was not accepted.  Let that be a lesson, in that it is very rare to find success without some setbacks along the way.   It may also have influenced Ms. Rowling more than anything, with great Dumbledore quotes such as, “It does not do to dwell on dreams and forget to live.”

Being in existence for almost a thousand years, there are a wide variety of architectural styles at Oxford.  As a matter of fact, Oxford contains examples of EVERY architectural style in England’s history since the Anglo-Saxon period.

I don't want to get too far off the Hogwarts Castle tangent, but as an example, shown below are Oxford's Saxon Tower on the left, and 27 Cornmarket Street on the right.  The Saxon Tower dates back to 1040, before the Anglo-Saxons were conquered by the Normans in 1066, and is part of a church called St. Michael at the North Gate.  It is the official City Church of Oxford.  It's simple, as Anglo-Saxon architecture was, but it's almost a thousand years old! Incidentally, for a small fee you can climb the steps to the top for some good views of Oxford.

The building at 27 Cornmarket Street is just across Ship Street from the Saxon Tower.  Dating back to the late fourteenth century, it is a great example of the half-timber framed architecture that was owned by the wealthy, but later became more widespread into the Shakespearean times of the sixteenth century and early seventeenth.  This was either originally an Inn or a home owned by a wealthy merchant, who lived on the top floors and had their business on the lower level.

In the half-timbered style, many of the top floors hang out over each of the floors below.  This was one of their methods of waterproofing, as it allowed water to run off the upper stories, rather than soaking back into the wall.  They didn't have waterproof membranes back then.

For the Harry Potter fans, the half-timbered style is the style of architecture in Godric's Hollow, where Voldemort was first defeated, and where Harry returns to visit his parent's graves.

Oxford has the biggest smorgasbord of architecture I've ever seen in one area.  The storybook cottage shown above is likely a home once owned by an employee of the university, and possibly still is.

‍The University of Oxford has thirty-eight different colleges.  Christ Church College was designed in the Perpendicular Gothic Style, the same style as the Palace of Westminster.  Christ Church’s dining hall was another inspiration for the Great Hall at Hogwarts Castle.  In fact, the dimensions were kept exactly the same at 40 feet by 120 feet.  The rows of tables at Christ Church are only three wide, versus four wide for the four houses (Gryffindor,  Ravenclaw, Hufflepuff and Slytherin) of the Great Hall in the films.  Imagine this room with the trusses and bigger arched window of Westminster Hall, and you then have the Great Hall of Hogwarts.

In The Philosopher’s Stone (the first film), a staircase in one of the many buildings of Christ Church College leads the students up to the main chamber, where Professor McGonagall stands waiting for them, before entering the Great Hall for the Sorting Ceremony.  Notice the fan-vaulted ceiling, an architectural style unique to England.

‍Oxford's Bodleian Library is another example of the Perpendicular Gothic Style.  Duke Humphrey’s Library (built 1450-1480 and partially remodeled in the 16th and 17th centuries) is the oldest reading room in Bodleian Library, and was the location of the Hogwarts Castle Library.

On the ground floor of the Bodleian Library is Oxford’s Divinity School (1427-1483).  With its elaborate fan vaults and large windows, the Divinity School was used as Hogwarts’ music room, where Professor McGonagall taught the students how to dance.  It was also used as the infirmary, the school hospital where Harry awakens at the end of the first film, The Philosopher’s Stone, and where Ron stays after being poisoned in the sixth film,  The Half-Blood Prince.

‍The Cloisters at Oxford's New College were the location where Draco Malfoy attempts to attack Harry, but is intercepted by Alastar “Mad Eye” Moody, who turns Draco into a ferret.  Moody is then scolded by Professor McGonagall.  This occurred in Harry Potter and the Goblet of Fire.  Other scenes were filmed of the students walking and meeting in the cloisters.

There are other structures that have influenced the architecture of Hogwarts and other elements in the Harry Potter world, but for the sake of this getting too long, and me needing to get back to design work, I'll continue this later.  Is there anything specific you would like to see?  Feel free to also shoot me questions.

‍Hendricks Architecture has designed everything from small mountain cabins and beach houses, to expansive mountain lodges and estates.  We're always open to designing castles and cathedrals as well.